Bitter Kola, also known as Garcinia kola has been used in African culture for centuries for both traditional and medicinal purposes. It contains dimeric flavonoid, lipase inhibitor which is believed to have many healing benefits. In Yoruba land, it is called Orogbo. 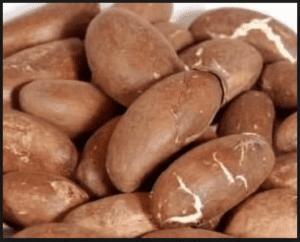 The Hausas call it Miji-Goro, while it is called Akiilu by the Igbos. People that know the value of this kola always keep it handy and carry it along in their pockets. Bitter kola may be ancient but it’s not only meant for elders or visitors. After reading about the amazing benefits of bitter kola in this article, you will never look at it the same way.

That aside, traditional healers have for many years prescribed bitter kola for the treatment of malaria infections. Researchers who reported that bitter kola had anti-malaria effect in the 2010 issue of Journal of Medicinal Plants Research, from a survey of plants used by traditional healers in the Democratic Republic of Congo, attributed this to its quinones content. Furthermore, kolaviron, the powerful chemical compound found in bitter kola, was reportedly tested on a malaria parasite and found to inhibit malarial activity.

Bitter kola (Garcinia kola) has been used for centuries to treat chest colds in traditional medicine, but research has taken a look and found out why it is effective. A study in the 2009 issue of The Internet Journal of Pulmonary Medicine, performed on mice, reports that Garcinia kola improved respiratory function after 28 days of use of a Garcinia extract. The study shows that Garcinia kola works by dilating the alveolar ducts and sacs in the lungs improving the strength of the fibers in the lung tissue. Bitter kola’s beneficial lung properties are attributed to its high antioxidant content.

An increase in eye pressure can lead to glaucoma, according to a report from The New York Times Health Guide. Researchers at Lagos University Teaching Hospital in Nigeria tested the effectiveness of eye drops that contained 0.5 percent extract of Garcinia kola. The results of their study, published in the January 2010 issue of Middle East African Journal of Opthalmology, showed that the opthamolic solution that contained the Garcinia significantly reduced eye pressure when used twice a day.

Bitter Kola has been known to be a natural hunger suppressant and also increases the urge to drink more water.

Bitter kola is a potent antibiotic which could be efficacious in the treatment of HIV and AIDS. A researcher with the Nigeria Natural Medicine Development Agency (NNMDA), Mrs. Chinyere Nwokeke said that bitter kola could be used in treating opportunistic infections associated with HIV. She said: “Bitter kola is highly recommended in the treatment of HIV and AIDS because of its antibacterial, detoxification, and cleansing properties”. She also said that the chemical, Saponin, in bitter kola is responsible for its cleansing effect. Saponin is mainly used as a tonic for the liver, it enhances the functions of the liver and gallbladder.

Osteoarthritis is the most common form of arthritis, characterized by pain, inflammation and limited movement in the joints, according to the National Institutes of Health. Causes of osteoarthritis can include joint injury, obesity and aging. Since many arthritis patients prefer natural herbal medicines to other pain relievers and medications, researchers at Obafemi Awolowo University in Nigeria tested the effects of Garcinia kola against arthritis symptoms. The results of the study, written by Olayinka O. Adegbehingbe and published in the July 2008 issue of the Journal of Orthopaedic Surgery and Research, concluded that Garcinia kola significantly reduced inflammation and pain and increased joint movement in subjects that had osteoarthritis symptoms.

Bitter Kola is really more powerful than it looks. As you can see, there are many benefits hidden in this small bitter plant product.