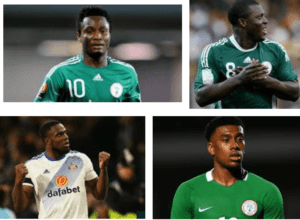 Football is the most viewed sports in the world. Every country has embraced the Sport and tries to map out a good part of their budget for paying the players. However, what Nigeria pays footballers is peanut compared to what other countries, say European countries, pay. Let’s look at a brief history of the top 10 Nigerian richest footballers and their net worth;

Mikel started his career at the age of 12 when he was selected to play for Pepsi Football Academy. His unique talent paved way for him and he has been playing in top Clubs since then. Today he is the richest footballer from Nigeria. This talented midfielder has a net worth of approximately 57 – 60 million U. S dollars.

Obafemi began his career about 19 years ago. He played in the streets and was so good that he was noticed by professionals, so he switched his Nigerian club to Italy. He kept developing, signing new contracts, and earning his millions. According to various sources, his net worth is approximately 35 million U.S. dollars.

Victor Moses, the popular and wealthy player from Nigeria ranks number 3. His career started when he was only 11 years old. Victor’s appearance at 2010’s Premier League made him extremely famous in and outside Nigeria. Growing professionally, this football star was asked to join Chelsea in 2012. He has also played for Liverpool and other prestigious clubs. He is back in Chelsea with a net worth of about 20-23 million U.S. dollars.

Many Nigerians only noticed Ahmed Musa for the first time during the 2018 World Cup Match but he has been in this career for so long. Ahmed’s incredible career started 10 years ago. He played for GBS Football Academy and JUTH F.C. and other Nigerian clubs. He has been playing for international clubs, developing and growing professionally since 2010. The professional left winger and forwarder, Ahmed Musa is from Jos in Plateau State. His net worth is about 18 million U.S. dollars.

Emmanuel started his career with Delta Force Club as a striker though it didn’t fetch him much money. He moved to South Africa 10 years ago and kept playing. He played for different teams, representing Nigeria in international clubs and earning good salaries. His current net worth is approximately 18 million U.S. dollars.

Yakubu is from Edo state, but his career began in Lagos state. Officially retired from the world of football at the end of 2017, Yakubu is believed to have a net worth of over 14 million U.S. dollars.

The famous striker Victor Anichebe started his career 15 years ago, with the first contract signed in 2006. Based on multiple sources, this Nigerian footballer’s net worth is approximately 11 million U.S. dollars.

Vincent Enyeama, the famous and talented goalkeeper, has been playing since 1999. His overwhelming career started in Nigeria. He was part of Nigerian National Team for 13 years. He also played for different international clubs. Different sources state that Vincent has earned approximately 7 million U.S. dollars.

This popular defender was born in Lagos, Nigeria. He started his impressive career at Gabros International and has played for many foreign teams since 2003. Currently, he plays for Rovaniemen Palloseura shortly called RoPS.

It is believed that Taye’s net worth is approximately 6.6 million U.S. dollars.

This famous footballer has Nigerian and Russian origins. He is talented and loved by many people in and outside the country. This great player has played for many football teams across the globe mostly as a winger and forwarder. The start of Peter’s career was in the Nigeria Premier League. He also represented Nigeria in over sixty games, including World Cups and Africa Cup of Nations. In 2017, Peter signed a contract with Madura United (Liga 1, Indonesia).

The main highlights of his career were between 2002-2014. These were the 12 years when he earned most of his net worth of approximately 5.5 million U.S. dollars.