2face has dragged his supposed friend, Blackface to court over his long-standing claim that he was the writer of the award-winning song ‘African Queen’.

After the song appeared on 2baba’s debut solo album Face 2 Face in 2004 it became an international hit.

2baba in the suit is claiming N5million damages to be paid him by Blackface. 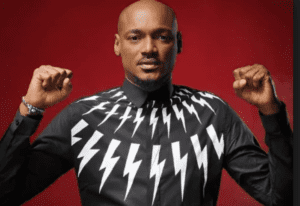 Apart from claiming to had written 2face hit song, ‘African Queen’, Blackface also alleged that he wrote ‘Let Somebody Love You’ for 2face.

The court documents were posted by Blackface on his Instagram page, while he noted that his legal team will be responding in a few days.

2baba whose real name is Innocent Ujah Idibia and Blackface, Ahmedu Augustine Obiabo were good friends and one would not be mistaken to call them brothers.

The duo used to be members of the now-defunct Plantashun Boiz alongside Faze- Chibuzor Oji.

The group was formed during their college years in Enugu, at the Institute Of Management And Technology (I.M.T Enugu) and it was managed by Owoyemi Akinwale Nathaniel (Natz), Ifeanyi Oji (Odogwu), and Obasi Leonard (Baba Leo).

Their rift started after 2face hit the international market with his hit song ‘African Queen’. Since then, they have been engaging in war of words online with Blackface being the aggressor most times.

Some of the spectators have wondered why the third member of their group, Faze hasn’t come in to settle their differences but he said he has tried many times to no avail.

Adding: “I actually tried to make peace between 2face and Blackface. I called them on several occasions and asked them to settle the issue amicably. However, they have some unresolved issues between them and I think they would settle their differences in due time.

“Even brothers have rifts; so, there is nothing unusual about it. 2face and Blackface are from the same area and they were even together before I came into the picture. They know how to relate with each other and would come around.”