Biggest Country In The World: The world has made frantic efforts to keep a tab on the population of each country alongside landmass.

Countries of the world make projections of their numbers to help ascertain the total number of inhabitants in each country and as well give a clearer figure of the world’s population.

It is easy to measure the landmass of a country but the number of the inhabitants are not always easy to get. Hence, some international agencies use estimation, even at the backdrop of some countries that do not share the projection of their numbers. 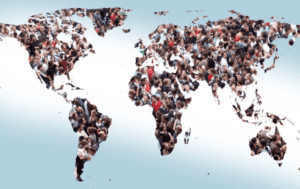 Also, the census has also proven to be a very good tool in collecting the data on the numeric strength of a country. Although it proves difficult to ascertain the actual when a country has not conducted census up to about 20-40 years.

The record has it that there are a total of 195 independent countries in the world plus several dependent and autonomous territories as well as areas with no self-government.

Africa has the highest number of countries totaling 54, followed by Asia 48, Europe 44, Caribbean and Latin America 33, Oceania 14  and the Northern part of America has only 2 countries.

Having known the strength as per the number of countries in each continent; what about the number of the people and the landmass they occupy?

World population is approximately 7.6 billion according to recent reports. Here are the top 3 biggest countries in the world by population:

For many years in a row, China has occupied the top position of the largest country in the world by population. Its population is about 1.4 billion and it keeps growing year after year. The number of citizens increased by over 11 percent in the last 18 years changing from over 1.2 billion (statistics from 2000) to over 1.4 billion (data from 2018).

USA has been in the third place for many years. Although its population keeps growing, but the total estimates are far from Indian and Chinese results. The country had approximately 282 million people 18 years ago, in 2000. Its today’s population is over 326 million people.

Indonesia follows the USA, with the other countries coming behind each other, viz. Brazil, Pakistan, and Nigeria that is currently the 7th with its 195 million people.

As pointed out earlier, measuring landmass is easier and more exact than population. Hence, the countries with the largest landmass are as follows:

Though not among the top 3 by population, Russia covers over 17 million square kilometers. It has 14 countries it borders on. Although Russia doesn’t have the largest water area, but the sum of its land plus water is still overwhelming compared to others.

Canada covers a total area of over 9.9 million square kilometers. The country has more water area than Russia and its shoreline is the longest, measuring over 202 thousand kilometers.

USA  covers over 9.8 million square kilometers. The country comes third both in terms of population and total land area.

China has the land mass of nearly 9.6 million square kilometers and borders on 14 other countries. Apart from being the biggest in population in the world, it also has the biggest territory in Asia.

Meanwhile, Nigeria comes 31st according to the UNS data.

Now you know the name of the biggest country in the world by population and land mass.