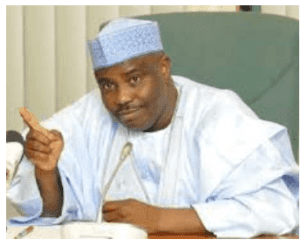 He hinted that if he had wanted to remain in the APC and battle the party’s ticket with Buhari, he would have done so and win the presidency.

This was coming barely 24hrs after Senate President, Bukola Saraki, accused Tinubu, of supporting President Muhammadu Buhari’s re-election only with the hope that he could succeed him in 2023.

Saraki was responding to an open letter written by Tinubu on Sunday, where Tinubu said the Senate President dumped the APC because of his Presidential ambition and selfish quest for power rather than good governance.

Reacting to the same letter, where Tinubu stated “Governor Tambuwal’s exit can be distilled to one cause. He covets the Presidency. However, he had not the stomach to challenge President Buhari in a primary…” Tambuwal revealed that the APC national leader tried to rock the boat when he was denied Buhari’s vice presidency in 2015.

He stated that Tinubu’s letter was a clear indication of no internal democracy in the APC.

According to a statement on the Sokoto State’s Twitter handle, @sokotogovthouse, the governor maintained that Tinubu thinks everyone was like him.

According to the statement: “If I wanted to and if the Presidency is what (why) Ahmed Tinubu thinks I defected, I could contest with President Buhari under the APC. I have what it takes to have contested with Mr. President.”

“Tinubu tried to rock the boat when he was denied Buhari’s vice presidency. He thinks every other person could behave his way. If I wanted to contest under the APC as president, I could have done so and only the votes could have produced a winner.”