President Donald Trump has said he will shut down the government if Democrats refused to cooperate in effecting his immigration laws and funding for a wall on the border with Mexico. 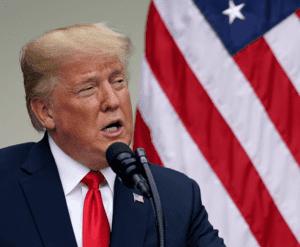 This was coming after the government had already been shut down twice this year. First was over a failed deal for the Dreamers, while the second was over a funding bill.

Trump took to his tweeter handle, Donald J. Trump (@realDonaldTrump) July 29, 2018, to issue the threat while exhorting Congress to cooperate by giving him its votes for Border Security.

The tweets came shortly after the government said that over 1,800 children separated at the US-Mexico border had been reunited with their families.

Trump tweeted: “I would be willing to “shut down” government if the Democrats do not give us the votes for Border Security, which includes the Wall! Must get rid of Lottery, Catch & Release etc. and finally, go to a system of Immigration based on MERIT! We need great people coming into our Country!

Trump condemned the immigration policy that allows up to 50,000 immigrants to receive visas each year and the practice of arresting migrants for crossing the border illegally and freeing them until their cases are adjudicated.

He was demanding a $5 billion in funding for the border wall this year, though he’s ready to wait until after the midterms.

He also reinstated his administration’s proposed merit-based immigration system, which would see potential migrants on factors such as age, education, fluency in English, willingness to invest capital in the US, among others.

Recall that an immigration bill supported by conservative Republicans failed to pass the House of Representatives.

Speaker Paul Ryan said that $1.6bn had already been agreed on for the wall, and lawmakers were seeking another request for $5bn.

Meanwhile, Trump’s administration has since inception canvassed zero tolerance policy, which proposes the prosecution of any individual caught crossing the southern border illegally. This policy was suspended after it received a public condemnation following the separation of some 2,000 children from their families at the border as the aftermath.