‘Being in Senate Forever’: My Advice Was Taken Out of Context- Ekweremadu. The Deputy Senate President, Ike Ekweremadu, has made some clarifications regarding a comment attributed to him where he was quoted to have said he could remain in the Senate forever if he so desires.

The Deputy Senate President reportedly made the controversial statement during a dialogue organized by the #NotTooYoungToRun movement, in Abuja on Thursday.

The #NotTooYoungToRun movement lobbied for the passage of a new law that reduced the ages of qualification for political offices In Nigeria. 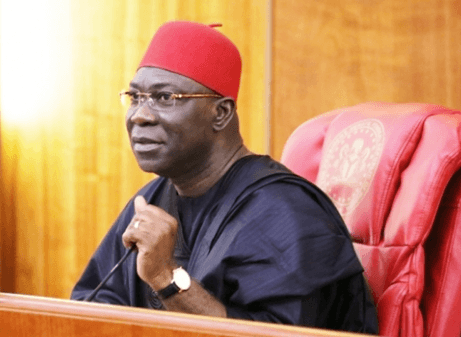 He was quoted as saying: “I’m in total touch with my people and that is why if I want to remain in Senate forever, I will”.

But in a statement released on his official Facebook page, @iamekweremadu, he explained that his advice was taken out of context.

The Deputy Senate President hinted that he used his success story to explain that the secret of his political staying power lies in relating closely with constituents.

Ekweremadu noted he was only mentoring the youth that they needed to be rooted at the grassroots and relate closely with their immediate constituencies to achieve their political dreams, ”using himself as an example”.

He added: “My advice was taken out of context. I have always seized opportunities of meeting the youth and other aspiring politicians, who consult me on their political ambitions against the erroneous notion that they must have a godfather in Abuja or the party to succeed in politics.

“Much as I played a key role in ensuring that the Not-Too-Young-To-Run Bill succeeded and even wanted 18 years as age qualification to run for office, I have always advised my mentees that it is erroneous to hope to win elections relying only on the fact that they are young.

“I always advise them to start from somewhere, preferably the grassroots and remain with people even when elected. In my case, I served as Chairman of my age grade association at ten and served so many years as the President of my community’s town union before serving as the pioneer Chairman of my Local Government Area (LGA), etc.”.

He continued: ”Making oneself accessible to them and ensuring justice and equity in the distribution of opportunities and development projects.

“I said that so long as I continued on this path, my people would always want me to run, ready to re-elect me as many times as I am willing to present myself. This is a verifiable fact.

“This is despite the fact that my town, Mpu, is the smallest in my LGA, and my LGA is the least in Enugu West Senatorial. And that is the more reason I remain humble about it and most grateful to my people, who are my primary employers and above all to God to whom all power belongs, and whose grace has no doubt brought me this far”.