There are serious plans by Members of the newPDP faction of the ruling All Progressives Congress (APC), to open up on their next move.

The group revealed it will confirm whether to stay or leave the ruling Party within the week, this was even after reports that the group would leave the APC during its Saturday, June 23 national convention failed.

A leader of the group, Abubakar Kawu Baraje in a statement on Sunday, July 1, said within the week they would have concluded their consultations and make known their stand. 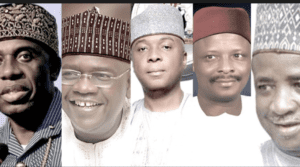 “We will make our positions known to Nigerians in the first week of July. By then, we would have concluded our consultations and come up with our position on all the things we stood for which are not for personal gains but rather in the general interest of the downtrodden masses.

“We have been meeting regularly and the time is now ripe to make our positions known to all well-meaning Nigerians.

“The cooperate interest of the citizens of this country and a united Nigeria where no man is oppressed is paramount and very dear to our hearts” he stated.

Meanwhile, it has been revealed that among members of the group who will meet within the week include Baraje, Senate President Bukola Saraki, the Speaker House of Representatives Yakubu Dogara and Sokoto state governor Aminu Tambuwal among others.