Security personnel are easily identified even from afar off. This identification is not tied to their brazenly built body or the fierce looking countenance, rather their uniforms. Each security agency has a distinguishable uniform. These uniforms differentiate them from one another, although some have similar features but are not still the same. 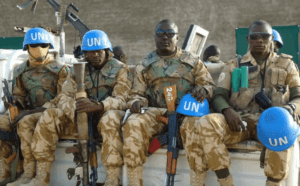 These uniforms are worn depending on the occasion. And that is why they come in many types, to soothe events, enhance personnel smartness and achieve a wholesome aesthetic.

Hence, the military uniforms have a long history and unique symbolism, dating back to the Nigerian civil war with their then vertical lizard camouflage pattern. Each uniform has its significance and that determines the wearing. Also, the mission determines the type of military camouflage that will be worn alongside occasions as stated.

Therefore, the types of military uniforms are listed below;

Nigerian army is the biggest component of the Nigerian Armed Forces, it is responsible for operations of land warfare. Currently, the army consists of:

There is also another camouflage type of the uniform that is called U.S. Woodland. This type of camouflage adopted by the armies of many countries, Nigerian Navy is among them.

These are some of the uniform types and colors available today:

“The Nigerian Army has decided to change the camouflage uniform of the service. We have also decided to make it ourselves so that it will have a uniform look. We will not allow anybody to make them for us. They are currently being made at the Nigerian Army Tailoring Department at Yaba, Lagos State. It will make us look smarter and better”.

The military forces of Nigeria receive significant support from the government, so the new uniform is only one of the innovations expected in the Nigerian Army.

ALSO READ:   Top 3 Hausa Food Recipes | Get To Know How They Are Prepared
Loading Comments...