Ebonyi state Governor and the Chairman, South East Governors Forum, Engr. David Umahi has told one of the top PDP presidential aspirants and the former governor of Kano state, Rabiu Kwankwaso, that South East zone will vote for equity, justice, and fairness come 2019.

He said this on Sunday, August 26, at the Government House, Abakaliki, while receiving Kwankwaso.

Umahi reiterated that the zone will have to negotiate with any presidential aspirant who wants south-east to vote for him to know what the zone stands to benefit. 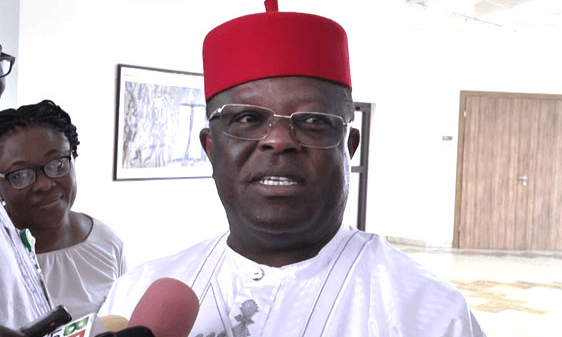 He said gone were the days a candidate will be voted for yet the zone would have nothing to show for their support.

Gov. Umahi described the people of South East as free, truthful, loving and whose unity is important to them, adding that the zone bond together as one people and take decisions as one.

However, the Governor said Kwankwaso demonstrated his abilities to govern when he was Kano Governor, adding that he was qualified to become the president of the country.

“The Nigeria people are getting more experienced.

“As people come to speak, they guage the aspirants and if anybody tells you that he can influence the choice of any aspirant in this State, the person is not telling you the truth.

“At the end of the day, the decision of the best aspirant to follow will be that of the people and we will definitely let the aspirants know who our choice is and the reason behind the choice.

“We may not be that rich but we are rich in truth.

“We desire equity, justic, and fairness.

“We are very free people and very loving people, and that’s why we can come to your backyard in Kano, buy lands and build houses and get ourselves at rest with the people and we and the people will do business.

“All that we need to thrive as a people is for fairness, Justice and equity to be enthroned

“And if any body says that South-east will not negotiate with the person that they shall cast their votes for, it is not true.

“This is because whether you are APC or PDP, whatever position you are having, if there is no more Nigeria, you will not hold those positions”, Umahi stated

On his part, Kwankwaso, maintained that he stands the better chance to emerge PDP flag bearer because according to him, Kano state which is his home town plays a major role in who wins presidential election in Nigeria.

Stating that the last census as well as the number of registered voters in Kano have shown the state is the most populous in the country.

He noted that politics been a game of number, has already placed him ahead of other aspirants.

Kwankwaso promised to carry all party members along if elected president of the country.

Adding:“I, can comfortably recommend him for you for a second tenure. Anybody like him deserves 8 years so that he can complete the projects and programs he has started and even do more in the future. So, I congratulate the people of Ebonyi state and I’m so happy that we have such Governors in the PDP”.

“Because when we started, we did not involve this people at the table; because when we started, to them, it was too early and probably that was not the best way to start but we have witnessed expansion. When I contested governor in 1998 in Kano, there was no senior person that would say he was my leader in Kano.

“What we did was to mobilize market women, youths and people from motor parks; to the extent that one senior politician came to me and said only God can stop you Kwankwaso. And I asked him why? He said he has gone round Kano and have seen the level of mobilization and that if PDP refuses to give you ticket, the party will be in a mess.

“When the governorship primary was held and thank God, direct primary was adopted, where all party members with membership cards were allowed to vote, I won all the 44 LGAs of Kano. Your Excellency, today that mobilization is everywhere in the northern Nigeria. Today, you can hardly get any household without a member of Kwankwasiya.

“You may not know your Excellency especially when you are not supporting me that those under you are carrying the membership cards of kwankwasiya group in their pockets. A friend of mine told me that when the pressure was much to join Kwankwasiya movement, he called his family to convince them to join the group, they started laughing at him and when he asked them why they were laughing at him? They told him they were already members of Kwankwasiya and that why they did not tell him earlier was because he is always criticizing Kwankwasiya”.