Senator Adeleke: Authorities of Jacksonville State University (JSU), has finally opened up on the academic status of the senator representing Osun West Senatorial District and the state’s PDP gubernatorial candidate with them.

The university’s Director of Public Relations, Buffy Lockette, has revealed that Senator Adeleke attended JSU but that he never graduated. 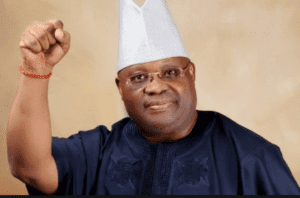 Lockette was replying to the International Centre for Investigative Report, (ICIR) inquiry on Adeleke’s degree.

The Center also went ahead to check the West African Examination Council’s website to view Adeleke’s O’ level result using examination number 19645/149 as circulated, unfortunately, the site replied, “result not available for this candidate in the specified year and exams date”.

Premium Times reports that the Council’s online result verification portal, which claims to contain data from 1980 to 2018, was also consulted with the same details. The result was brief: “candidate does not exist”.

And that Demianus Ojijeogu, WAEC’s Head of Public Affairs, told The ICIR all candidates’ results are in the custody of the Council and should be accessible on the website, regardless of performance in the examination.

“Even if the candidate has F9 throughout or is absent throughout, it is accessible,” he said.

Ojijeogu added that the Council was still working on results of candidates who wrote in 1981 and the surrounding years.

“You know there is this change of nomenclature in our examination. We used to have SSCE then WASC, and now WASSCE. So, we are trying to update the website; maybe they took some down.” He promised to confirm and provide feedback on why the results are not presently online.

Recall that two members of the People’s Democratic Party (PDP), Rasheed Olabayo and Oluwaseun Idowu, had approached the court claiming that Adeleke did not possess secondary school certificate as required by Section 177 (d) of the 1999 constitution and told the court to set aside the July 21, 2018, primary election which produced him as the governorship candidate of the PDP in the September gubernatorial election.

Olabayo, in his affidavit, said the senator truly attended Ede Muslim Grammar School “but did not leave with a School Leaving Certificate having absented himself from the school leaving examinations but for English where he scored a failing mark of F9”.

He said that granting the leave to restrain the PDP from presenting Adeleke as its governorship candidate over his inability to present his certificate may subject the court to mockery if the Senator thereafter presents the certificate.

Adding: “It will be inequitable not to allow the respondent to come and show his certificate if he has any but if given the opportunity to present his side of the case, the balance which is necessary for interlocutory injunction would be adequately considered.”

“Being an election matter, it is my conviction that the public will not be uninterested in the proceedings of this court”, explaining that the importance of the matter would make the court not to grant the injunction and warned that, “once a matter is before a court any party cannot take a further step without the express permission of the court”.

It was gathered that one of the exhibits provided to the court and obtained by The ICIR is Adeleke’s senior secondary school examination statement of result recently collected from Ede Muslim High School. It shows that the candidate had an F9 in English Language, while grades for Literature in English, Mathematics, Biology, Economics, Islamic Religious Studies, Christian Religious Studies, and Geography, were said to be pending.

Meanwhile,  Adeleke’s profile on the National Assembly website stated that he has a Diploma in Criminology from JSU and graduated in 1986. He also graduated from Ede Muslim Grammar School, Osun State, where he obtained O’Level Certificate.