Richest Musicians In Nigeria: Music celebrities will tell you that it’s not about having the most beautiful voice or lyrics, it’s about how your song makes people feel. If you win people’s hearts, you will become more popular; that means more shows; that means more money. Nigerian musicians are closely marking themselves and the list of the richest musicians keeps changing from year to year. Here are the ones that made it to the top 5 Richest Musicians In Nigeria in 2018. 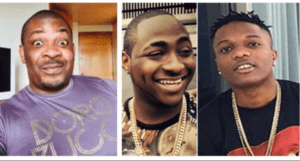 Michael Collins Ajereh with the stage name Don Jazzy is the richest musician in Nigeria.

Before opening his own recording studio, Don Jazzy worked with D’banj. From 2004 to 2012, they managed the project Mo’Hits Records. The partners stopped working together because of disagreements which arose between them. However, Don Jazzy’s solo career is quite successful. He has collaborated with such celebrities as Tiwa Savage, Korede Bello, Reekado Banks, etc.

Later it was raised to 40 million Naira. Don Jazzy is a Samsung brand ambassador, In 2013, an agreement was concluded for the amount of 110 million Naira. Also, a contract with Konga worth 15 million Naira was recently signed. This has made him the richest musician in Nigeria and the most eligible bachelor as well.

The former business partner of Don Jazzy is also one of the richest Nigerian musicians. His real name is Oladapo Daniel Oyebanjo. Some know him as Koko master. He is a talented Nigerian musician, singer, television star, and entrepreneur. Several times he was named the best performer of the year. Also, D’banj managed to become the best-selling African artist.

D’banj enjoys high popularity not only in Nigeria but also on the world stage. He is good at combining dancing electronic music with African beats. A lot of fans fell in love with D’banj because of the successful single “Oliver Twist”.

This song received a huge number of views and enthusiastic comments. After parting with Don Jazzy in 2012, he concluded a profitable deal with Sony Music Entertainment. Of particular importance is his performance at the closing ceremony of the 2013 African Cup of Nations.

His first deal was a contract with energy drink producers Power Fist. In 2013, he became the brand ambassador of Bank of Industry (BOI). He also signed a multi-million dollar deal with Globacom which was terminated in 2010.

In 2014, a contract was signed with Heritage Bank. In 2015, the musician became the official African ambassador of Ciroc Nigeria and SLOT brand. This kind of business activity allowed him to earn a lot of money and get on this list.

Innocent Ujah Idibia also known as 2Baba, is a creative songwriter and a talented singer. He always tries to convey a message through his songs maybe that’s why his fans love him so much. Other celebrities also treat him with great respect because 2face Idibia is a kind of authority.

He started as a member of the group “Plantashun Boys” formed by three friends. Together they created and performed many wonderful songs. After the split, the former group members began solo careers. 2face became the most successful of them and achieved phenomenal popularity.

The song “African Queen” received local and international recognition, a deep praise from critics. 2face is one of the best African musicians. He has also been featured in a Hollywood movie.

In 2005, the general public got access to the first album of the artist named “N’abania”. In 2010, there was a second full-fledged studio work Uplifted. This was an extremely favorable time. Since then nothing could stop Flavour in his creative progress. The artist was invited to perform at large-scale community events and concerts.

Flavour often collaborate with local and foreign celebrities and has won many awards. All this allowed him to accumulate a good net worth.

His full name is David Adedeji Adeleke. Davido was born in Atlanta, Georgia. At an early age, he moved to Lagos. The “Dami Duro” single, released in 2011, received deep approval from the public. Davido and his elder brother Adewale Adeleke are co-owners of the record label HKN Music. Many popular Nigerian celebrities have recorded their hits there.

His debut album “Omo Baba Olowo” was released in 2012. Many tracks from it became extremely popular. Between 2013-2015, Davido released a number of singles. In January 2016, it became known that Davido concluded a deal with Sony Music. In addition, this artist has his own record label Davido Music Worldwide (DMW).