The woman’s hip is one of her unique selling points. A curvy figure will always get heads turning. That’s why women go out of their way and comfort to increase their natural quota.

Let’s talk about body science. The bottom or nyash or booty consist of muscles, connective tissues, and subcutaneous fat, covered with the skin we see.

The roundness and ampleness of booties depend on the individual body build, the mass of muscles and fat. Men’s rear parts consist mainly of muscles but women’s contain also a considerable amount of fat. 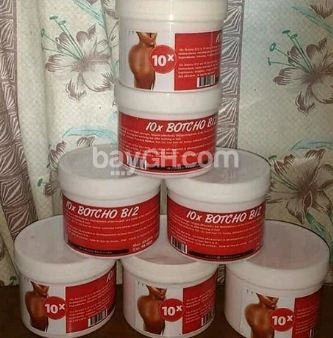 Some people adhere strictly to exercise routines which is a good way to train muscles and increase growth; some consume fatty products which not only increase the butt but other parts of the body as well; while many manufacturers bank on this desperation to make money.

The mechanism behind these products and how they enhance the butt is not something that can be easily explained.  The trending product now is Botcho cream which makes a lot of claims, but how many of them are true? Does it have any side effects? Read on to find out.

The Botcho cream is not only one cream. There are three ointments in the line and all seem to have different effects as the manufacturer claims. The cream appeared in Africa several years ago and then spread all around the globe together with the fashion for curvy bottoms.

People think that Botcho is the name of the key ingredient in the cream. But it’s not. Botcho is an Ivory Coast slang name for the buttocks or booty and the brand simply shows where the cream should be applied.

The inventor of the cream is an African man named Jean Claude Zoh, known as Doctor Zoh despite the fact that he never attended any medical school or university. He has no medical education and neither is he a pharmacist. However, he has managed to mix some natural ingredients to produce a cream that is said to have the magical effect of booty enhancement.

It’s like a magical remedy that will free women from doing squats and other stressful exercises but give them the curvy booties they desire. After all, truth be told, the application of some creams is better than implantations and other intrusions in the natural body processes and health.

What are the Botcho Cream Ingredients and Side Effects?

As a matter of fact, you should be careful of what you apply on your skin and the booty is quite soft with much skin. A product you’re not sure if you’re allergic to or not can cause damage in no time. Some say it may contain honey but we all know, honey is not the active ingredient and does not expand bottoms.

After some studying of the reviews online and offline, there have not been any obvious side effects. The only side effect that many women have noticed is no effect at all and, respectively, the waste of their money.

Actually, the side effects depend on the content of the cream and while the ingredients are not revealed, it’s impossible to guess what the side effects will be. The more reason why you should avoid such product. They can cause more harm than good.