Ugu Leaves: Everyone has an idea of the health benefits of vegetables in the body. They are packed with powerful antioxidants, essential vitamins and minerals that aid in digestion and boosting the immune system. That is general knowledge but different vegetables contain these elements in varying quantities. 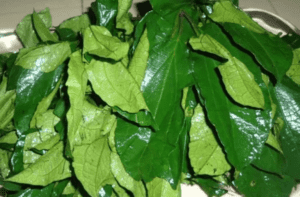 Due to the vitamin C and antioxidants contained in ugu leaves, they can help to speed up the healing processes, as well as alleviate some minor illnesses and diseases. In the olden days, they were often used in homemade medicine.

2) They can help treat anemia

The fluted pumpkin leaves contain iron, which helps in preventing and treating iron-deficiency anaemia. Regular consumption of ugu leaves is said to help with anaemia in the long term.

Ugu leaves are a natural antioxidant. They contain a whole bunch of useful elements that can help the body protect itself from bacteria and viruses.

4) They can prevent osteoporosis

Due to the high amount of Calcium contained in the leaves, they can strengthen the bones, thus lowering the risk of having osteoporosis (a disease that affects density of bones, making them weak and brittle).

5) Good for the teeth

Due to the aforementioned large amount of Calcium, ugu leaves can help you maintain your teeth and save them from cavities or tooth decay. So you can be rest assured that your teeth will be as strong as your bones, if not stronger.

For centuries, they have been used by healers to increase a man’s chances of becoming a father. In scientific terms, they promote spermatogenesis, which means higher chances of making a baby.

7) They increase the production of breast milk

Ugu leaves can help a woman to produce more milk. So if breastfeeding is a struggle for you, consider adding ugu leaves to your diet if you have not done that already.

Ugu is great for people with diabetes or those who might have a high risk of developing it. That is because they can somehow lower the blood sugar due to the presence of polysaccharides and ethyl acetate.

9) They help in a fight against cancer

Even though this battle is often a losing one, ugu leaves can be a natural remedy against cancer. Now, we are not saying that you should abandon treatment and stock up on ugu leaves, but you should eat some anyway, at least for prevention purposes.

10) Ugu is a great stress reliever.

*It is believed that they can also help against Alzheimer’s.