Biggest Churches In Nigeria: There are many churches in Nigeria; both Orthodox and Pentecostal. It’s hard to visit any area and not find a church there especially in the Eastern, Southern and Western areas. Picking the biggest churches is not an easy task because the list of churches in Nigeria should be more than one hundred. 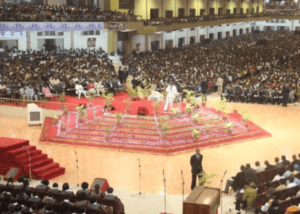 The RCCG seems to be one of the most popular churches in the country. By some accounts, it could even be considered the most populated church in Nigeria. It was founded by Josiah Akindayomi back in 1952, and it has since grown in size and popularity quite significantly.

RCCG’s current General Overseer is Enoch Adeboye, who was appointed by the late Akindayomi himself in 1981. The church is considered to be Protestant by classification, Pentecostal by orientation and Evangelical by theology.

You can find the church’s headquarters at 46KM, Lagos-Ibadan Expressway, Mowe, Ogun State, but its reach is far greater than that. It has a presence in 196 countries across the world, and it does not seem like that is the end, as RCCG is still growing.

The Living Faith Church Worldwide, also known as Winners Chapel traces its origins back to 1983 when David Oyedepo founded it based on his vision sent to him God. The church has since grown exponentially, as in 2014, it could be found in 65 countries. Winners Chapel is Evangelical by classification and Neo-charismatic by theology.

One of the most recognizable features of this church is the giant church complex named Canaanland in Ota, which houses the church’s headquarters, also known as Faith Tabernacle. It is said to fit 50,400 people, as well as the outside overflow capacity of 250,000. At one point, it was the largest church building in the world.

Some of you may know it as Believers’ LoveWorld Incorporated. This church is among the top 5 largest churches in Nigeria. It was founded in 1987 by Chris Oyakhilome in Lagos, and today, it has spread its reach all over the world with about 13 million members across the globe.

Christ Embassy has its own television stations in several countries, including Nigeria, USA, India and the UK, as well as its own publishing house named Loveworld Publications.

Among all the churches on this list, MFM seems to be the youngest one. It was founded in 1989 by Daniel Kolawole Olukoya, who held a prayer meeting in his living room in Yaba, Lagos. Five years later, the newly-founded church had its first service on what had once been an abandoned slum not far from the University of Lagos.

ALSO READ:   Sewing And Stitches: Lean How To Sew and Do It Yourself

Over the years, the size of the congregation grew significantly, which is why MFM has ended up on this list. It has branches in the UK, Canada, the US, as well as in several other countries across the world. It offers various services, from your regular church services to educational materials and web TV.

Last, but certainly not least, is Deeper Life Bible Church founded by Williams Folorunsho Kumuyi in 1973. You might also know it as Deeper Christian Life Ministry. Its headquarters can be found in Lagos, while its branches spread to Russia, India, Sub-Saharan Africa, Western Europe and North America.

Deeper Life Bible Church started out as a small Bible study group with 15 people. Over the years, this small number has turned into thousands and spread around all over the world.