Asa Asika: Every celebrity has a manager who oversees all his contracts and appearances; they depend on them for advice and direction. In return, they are paid handsomely for their services. The pay run into millions and it’s a dream job for many. But only a few can really be trusted to put the interest of the celeb before his.

So Davido, the very famous Nigerian Musician’s Manager happens to be the topic of this discussion; by name, Asa Asika. This manager is so young and handsome. Everyone is wondering how he got there. What is he really like? Is he single or searching? You will find out from this summarized biography of Asa Asika. 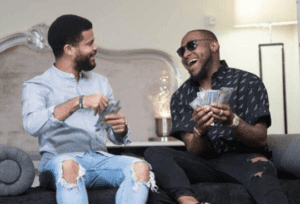 Oldest in a family of three, Asa Asika was born on August 20th, 1990. At 7, he lost his mom. This was very tragic but it helped him to grow faster and learn how to take up responsibilities early in life.

He attended White Sand School in Lekki, Lagos State, and graduated in 2008. He dropped out of college, stating that he supports education and thinks everyone needs to get a certain level of it, but the higher education is not for him. In his opinion, some people with Master’s degrees are struggling to find a job, while some who have not received full education is maintaining great business. When asked how he reached his amazing success, he says that every young person can reach the same thing if they are determined and really go for what they want. He also advises young people not to listen to those who tell them that they are unable to do it.

Asa’s favorite hobbies include watching movies at home or playing football with his friends. By the way, he is also a passionate supporter of Nigerian national football team.

His family members are quite influential, and because of them, he has been involved in show business since he was young. His cousin is a well-known musician Naeto C, and his uncle is Obi Asika, who is the CEO of Storm 360. Asa began working at shows, thanks to this company.

He was only sixteen when his career kicked off. He worked with such famous people as Ikechukwu, ELDee, Sasha P, and of course, his cousin Naeto C. He was also involved in the production of such shows as Homecoming with MTN and “The Love of Music” Samsung concert. Aside from that, he contributed to the promotion and success of Rehab club in Lagos making it one of the most visited places in the city.

Asa Asika and Davido At First

The paths of Asa and Davido first crossed many years ago. When Asa first began working with Davido, he was only 20 years old. However, they managed to get some good work going. Asa was around during Davido’s breakthrough hit “Dami Duro”. It was the single that brought him fame and acknowledgment. The duo was very productive together. When he was asked about his work with Davido, Asa said that the job was really demanding, and sometimes all that went wrong was blamed on him, but regardless it was a lot of fun. He enjoyed planning the strategies, going to the meetings, and promoting the music. He mentioned self-control as an important attribute in this line of business.

Asa and Davido split up in January 2013 due to a misunderstanding – they had some issues that were hard to resolve. In Davido’s words, he said that Asa was not mature enough for the job at the time and that there were some financial disputes between them, but they decided to remain the best of friends. Davido’s new manager became Kamal Ajiboye. The singer got along with him until 2017, when they had a fall-out, and many news outlets suspected that Davido sacked Kamal because he was unable to promote him internationally.

After his breakup with Davido, Asa decided to continue his artist management career and established the management company Stargaze, where he worked with famous producers, artists, DJs, and actors. He signed a lot of talented people and put a lot of effort into representing them in the best way. Asa Asika managed such remarkable people as D’Banj, Ayo Jay, and Boj.

Asa and Davido back again

After his fallout with Kamal, Davido turned back to the one his trusted friend, Asa Asika. In 2017, Davido and Asa decided to work together again.

Now, to the big question on everybody’s mind – Is Asa Asika single? Well, the answer is yes. He’s dating the beautiful DJ Cuppy (Florence Otedola), the talented musician and the daughter of Nigerian rich businessman Femi Otedola. The two have known each other for a long time, and at first, they denied all the claims of a relationship. Nevertheless, recently Asa and Florence finally confirmed that they are boyfriend and girlfriend. They have been making a lot of sweet posts on social media and flaunting each other. DJ Cuppy said about Asa that they have a lot of things in common and she is really inspired by him.

Asa, the youngest manager is a really respectable person in the music industry today. Nobody could have imagined that he will reach such great success, but he proved them wrong. I hope his story inspire you to follow your dreams!