How much do you know about the Nollywood actor, Damola Olatunji? This article contains some interesting details about this character and his acting career. 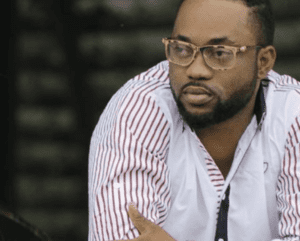 Damola Olatunji was born in Edo Agbo in Osun state. He is the second child in a family of six. His father was a civil servant and was hardly around.

So, he was practically raised by his mother, Ajibola Anika Olatunji, along with his siblings. She raised them in the fear of God and inculcated some principles that helped him in life. About his acting career, his mother was skeptical about it at first but later gave her blessings according to Damola.

Damola always dreamed of becoming an engineer, so he studied electrical engineering at Yaba College in Lagos state. Over time, he changed his desire and in the state where he grew up, began to engage in other activities.

He first joined the theater troupe, which performed on stage in their church. Olatunji was inspired by his mentor, Yomi Fash-Lanso, who strongly supported him and encouraged his acting. Damola came to the center of attention after the role in the film “Ojo” (Rain). The film was directed by his mentor. After the role of Oho, he became a famous actor in Nollywood.

Today, he is one of the most famous actors in Nollywood Yoruba genre. He has starred in over 100 films since his debut as an actor and now he is both a producer and director.

Olatunji and his wife Bukola met on set in 2014 and this meeting ignited passion in their hearts, after which they began to date. It was rumoured that their meeting took place much earlier when the actor was still married to his first wife. Damola and Bukola starred in several films, and this only strengthened their romantic feelings.

Damola Olatunji’s bio proves that long-distance relationships can weaken a marriage. The actor married his first wife on the 8th of April 2013. His first wife is Raliat Olatunji, but sadly their marriage ended.

From the very beginning, the relationship between Damola and Bukola was kept secret but later became public property when Bukola became pregnant. Soon they legalized their union. In January 2015, in the USA hospital, Bukola gave birth to twins, the couple called them Kehinde and Taiwo.

That’s all the information we have on Damola Olatunji’s bio. Now, you can relate better with this special character.