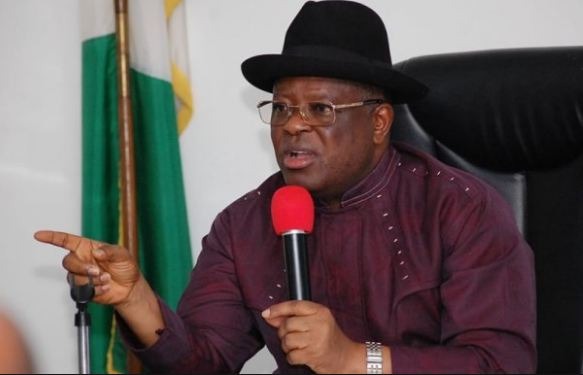 They were accused of unlawfully and forcefully entering into the dwelling house of His Excellency, David Umahi on 19th June and thereby committed an offense punishable under section 412 of the criminal code, law, cap 33, vol. 1 laws of Ebonyi State 2009.

The suspects were also accused of “threatening to do an act preparatory to an act of kidnapping and thereby committed an offense punishable under section 17 of the Ebonyi matters law cap 55, vol. 2 laws of Ebonyi State 2009.

“That you Ozoemena Sampson ‘m’ AloyIgwe’m’ and Ezediegwu Victor on or about the 19th day of June, 2018, at Uburu in the Abakaliki Magisterial District did conspire among yourselves to commit felony wit: attempted kidnapping and thereby committed an offence punishable under section 517A (a) of the Criminal code law cap .33 vol.1, laws of Ebonyi State 2009” the charge sheet stated

Meanwhile, counsel to the suspects’, Barrister ChimezeIbiam, pleaded for bail of the suspects but it was not granted as the court lacks the jurisdiction to do so.

The Magistrate, who presided over the matter, Magistrate S. U Ogoke ordered that the case file is transferred to the Director of Public Prosecution (DPP).

However, the case was adjourned to August 21, 2018, and the suspects were remanded in Abakaliki prison custody.