The Movement for the Actualization of the Sovereign State of Biafra (MASSOB),  has reinstated that President Muhammadu Buhari is Nigeria’s last president.

This was stated in a statement by the group’s National Director of Information, Comrade Edeson Samuel.

He enjoined politicians from Igbo extraction who are vying for any elective position to forget about it as there will be no Nigeria election in Biafra land. 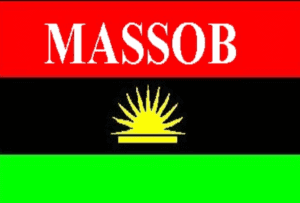 Samuel said participating in the 2019 election is as good as selling the future of their children and next generation to parasitic Hausa Fulani people.

“We see the coming political exercise as the continuation of our political, religious, academical, traditional, social and economic slavery in Nigeria.

“What happened in Ekiti state will be a child’s play compared to the manipulations, intimidations, assaults, riggings, and killings that will be masterminded and executed by the federal government in 2019.

“The Buhari led federal government has already perfected plans with his brother in charge of INEC to rule this political entity called Nigeria by all means.

“However Igbo senators should have known that their protest cannot change the decision of President Buhari who hates Ndigbo with passion.

“That is why MASSOB is calling the Igbo politicians and those aspiring to join the political train to re-think and support the emancipation of Ndigbo and Biafra.

“Participating in this election is as good as selling the future of our children and next generation to parasitic Hausa Fulani people.

“The future existence of any Igbo man is in Biafra, it is our hope, our destiny and our life,” he noted.

Meanwhile, Indigenous People of Biafra, (IPOB) has demanded the release of Dasuki, El-Zakzaky.

In a statement by the Media and Publicity Secretary of IPOB, Emma Powerful, the group called on International Criminal Court (ICC), in the Hague, to prevail on President Muhammadu Buhari to obey court judgements and orders by releasing the former National Security Adviser, (NSA) Col. Sambo Dasuki and Sheikh El-Zakzaky who were granted bail by different courts but are yet to be released.

The group appealed to the President of the ICC, Justice Chile Eboe-Osuji, and the Chief Prosecutor of the court, Madame Fatou Bensouda, to compel Federal Government to release the two without further delay as ordered by various law courts in Nigeria.

Stating that since Buhari has refused to release them, Nigeria Bar Association, (NBA) National Judicial Council (NJC) and the entire judicial machinery in Nigeria should consider going on strike as a way of forcing the government to obey judicial pronouncements.

“Coming at the heels of ‘Buhari’s’ lecture at the International Criminal Court, (ICC) in the Hague on the virtues of rule of law and the commitment of his government to adhere to court orders, it is hypocritical and criminal for the those that invited ‘Buhari’ to address them at the Hague conference to keep silent as rule of law is being destroyed in Nigeria.

“The black African President of the ICC Judge Chile Eboe-Osuji and the equally black African Chief Prosecutor of the court Madame Fatou Bensouda must cover their faces in shame for inviting a man they know doesn’t obey the law to address them on the need for a government to adhere to the rule of law.”

“Inviting Buhari to address the ICC when he has steadfastly refused to obey the law when it comes to Col. Dasuki, Sheikh El-Zakzaky and many IPOB detainees is the greatest mistake the court has ever made.”

“It doesn’t speak well of the diplomatic community in Nigeria either, especially Britain, the colonial master, and creator, to maintain a deafening silence in the face of unbridled tyranny.

“If Britain can offer its public opinion on the probity or lack of, in the conduct of elections in Ekiti State, surely it has a moral obligation to admonish the ‘Buhari’ government on its refusal to obey the law. Refusal to obey any given court order is a reaffirmation that Nigeria is only practicing paper democracy not indeed.”

“Anywhere on earth, the government is above the law,  that society seizes to be regarded as democratic. A US president obeys court orders, so does a British Prime Minister, why not ‘Buhari’.

“Therefore those presently referring to Nigeria as a democracy are knowingly and willfully misleading the public, because democracies obey the rule of law.”

“When an Attorney General of a country proudly stand up to defend what is, in essence, indefensible, one is bound to question the collective mental ability of such a society and wonder if indeed they are civilized.”

“Courage means standing up for what is right, especially in defense of those who cannot defend themselves regardless of ethnicity, religion or orientation. That is what IPOB was created for and what it will continue to uphold until Biafra is restored and beyond.

“The very least ICC can now do, along with the diplomatic community of civilized nations resident in Nigeria, is to prevail upon ‘Buhari’ to release Col. Dasuki and Sheikh El-Zakzaky without further delay as ordered by various law courts of the Federal Government of Nigeria. Nigeria Bar Association, National Judicial Council (NJC) and the entire judicial machinery in Nigeria should consider going on strike as a way of forcing this government to obey judicial pronouncements,” he said.