Messi, Ronaldo, Salah, for FIFA Men’s Player Of The Year

…Guardiola, Zidane for Coach of the Year

Lionel Messi, Cristiano Ronaldo, Kevin De Bruyne, Eden Hazard, Kylian Mbappe, and Mohamed Salah have all been nominated for The Best FIFA Men’s Player of the Year award for 2018.

Also, World Cup winners, Antoine Griezmann and Raphael Varan, as well as Golden Boot winner Harry Kane and Real Madrid midfielder Luka Modric are also on the list. Sadly, Neymar was not found in the final 10 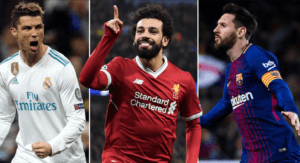 Recall that Ronaldo won the award in 2017, and he led Madrid to their third Champions League title in a row, while Messi scored 34 league goals to lead Barca to the Liga title.

While 26-year-old Salah, of Liverpool, broke the record by scoring 32 goals in 36 league appearances assisting his team to finish fourth in the league.

The award ceremony takes place in London on 24 September, with fans votes, and those of journalists, national team coaches, and captains all contributing to the outcome of the final three.