Maize Armyworm is one of the cereals that its economic value is high. It is consumed widely in Africa, either cooked or roasted. Maize is mostly planted during the rainy season alongside its harvest, with about two to three months period of maturity. Within the stipulated period of maturity, it could either grow to fruition or be attacked by maize armyworm. 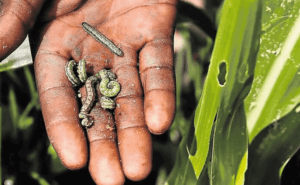 Armyworm is dreaded by maize farmers. The worm can destroy a field of maize and lead to an economic loss. The armyworm has a strong resistance capacity, as it can travel over a long distance and still survive.

It can even resist pesticides, with its ability to reproduce fast. The armyworm needs only one month to get from egg to larva. The larva stage lasts from one to three months. During this stage, it does the most damage to the crops. The approximate loss of farmers from the attack in Africa can be as high as $6.2 billion per year!

Therefore, farmers need to know how to control the maize pest. The best practices for keeping armyworm off from the maize field are as follows;

Planting time plays a great role in controlling maize armyworm. The planting of maize should be done early, during the rainy season. The late planted maize is one of the most favorite foods of the armyworm. The excess rain also helps to combat the spread of the worm.

The quality of the grain used in planting can also ensure the safety of the maize farm. Although the quality grain might be costlier it can withstand the infestation of armyworm in the farm. Also, good soils are essential to growing healthy plants, which can better withstand damage and infestation from pests. So, ensure the right soils are provided before planting. Poor soils will lead to imbalanced fertilization of plants and such will get the attention of insects.

This control measure has proved to be a better means, as it not only controls the pest but also boasts the economy of the farmer as he gains from cultivating other crops apart from maize in the farm. The armyworm prefers to lay eggs in a farm with only maize planted there, but when other crops are planted alongside with maize, it confuses the female armyworm as she flies over the crops; thereby causing difficulty in laying eggs.

Also, with the introduction of a variety of crops, the mixture of chemicals from the plants repels the armyworm. Polycropping also introduces natural enemies of armyworm to the farm, like birds or insects that eat them.

(4) Use of pesticides To Avoid Maize Armyworm

There are varieties of pesticides that can be used to control the armyworm, ranging from bio-pesticides to biochemical and microbe-based pesticides. These pesticides, when used in the right quantity, will control the infestation of the crop. However, these pesticides can also be harmful to humans, so extra care should be applied while using them. Synthetic pesticides should be avoided completely as they have the most adverse effects on human beings.

Moreso, frequent visitation of the farm can help curb the damage, as the farmer can manually crush the eggs and larva of the armyworm. So smaller farm holders can visit the farm twice a week to carry out this task.

Also, dirt, sawdust, sand, and ash can be introduced into whorls to control the armyworm. Such introduction destroys the armyworm eggs.