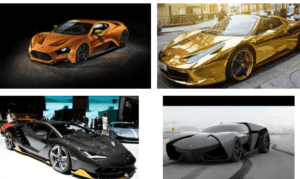 Bugatti Type 41 ‘La Royale’ has a length of 6.7m, equipped with an eight-cylinder engine. It has a capacity of 300 horsepower and volume of 12.7 liters. It could develop a fantastic speed for those times – 200 km/hr.

There are only six of this’royal’ car in the world. Bugatti made big cars before they became fashionable.

Perhaps the only serious competitor to the Bugatti Type 41 La Royale, released a few years later, in 1932, was slightly smaller, but still looked very impressive. The length is 5.79m, the engine is 4.8 liters in volume, and at the end of the composition – luxurious, 36-inch wheels.

The Coggiola T-Rex is a design from the Italian studio Coggiola. It is a full-size SUV on chassis GM HUMMER.  This exclusive model is made since 2002. Technically, the car is almost a complete copy of the HUMMER H1 – steel frame, independent suspension with large strokes, all-wheel drive with a downshift, clearance of 400 mm. The engine is a 5.6-liter turbodiesel with a capacity of 195 hp. The same as the army HUMMER, it allows the car to accelerate to 134 km/hr.

The largest pickup in the world is the Commercial Extreme Truck, released by an American company. Its length is 6.55meters, and its height is 2.55meters. In addition, the chassis of the snow-removing machine is mounted on it. The passenger compartment can accommodate 4 passengers, not counting the driver. The engine’s power is 220 horsepower.

This is an extended version of Ford F650, offered by Alton Truck Company. Alton F650 is equipped with a six-cylinder engine with a volume of 7.2 liters and a capacity of 230 hp. The car has seven doors and weighs about 12 tons, the cabin has seats for eight people.

Closely competing with Alton F650, Dunkel’s length is 9.7, width – 2.5, and height – 3.6 meters. This large car is a whole house on wheels: it has a kitchenette, sofa, extra bed on the ‘second floor’, reclining benches and even a shower! There’s only one of it in the world, even the small-scale production of this model is not possible.

The magnificent innovation was manufactured as a bus, yet outwardly it looks more like a car. This is a 15-meter giant with 16 doors and six wheels, while its width is 2.55 meters, and height – 1.65 meters. The Superbus is designed for 23 passengers, who are provided with the most comfortable trip, as they have such amenities as climate control, wireless Internet, TVs. Despite its size, the car can accelerate up to 250 km/hr.

This limousine called the American Dream is equipped with two driver’s salons – in front and behind. This allows you to carry out comfortable motion in both directions. The car needs a huge space to turn.

ALSO READ:   How to Roll Back or Uninstall a Problematic Windows Update

Kodiak is built on the basis of a middle-class truck. It is available in rear-wheel and all-wheel-drive versions and has several variants of frames, engines, transmissions, rear axles, not to mention the smaller details. The car has V8 engine with a capacity of 300 horsepower and cargo springs that changed the air suspension. The cabin is equipped with an expensive multimedia system with navigation, several TVs, and subwoofers. Interior paneling ‘in the carbon style’ looks weird, but with the price of the car around 70 thousand dollars you will understand why.

While choosing to ride the world largest cars, the needed space for the packing should also be considered and the ability to control the car amid the space it will take while on the motion against other cars on the road.

So, it is not only in the acquisition but also the ability to maneuver on the road. The bigger the car the bigger the skills for the driving.