Senate President Saraki as gathered got to Obasanjo’s house in the evening and the meeting lasted for about two hours. 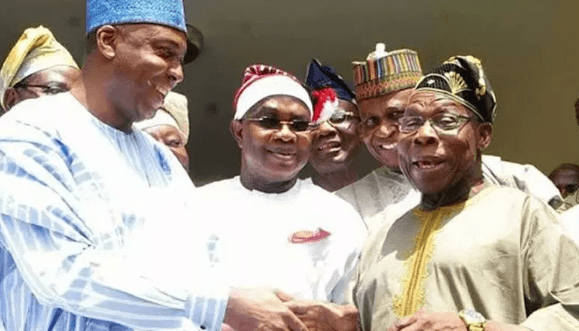 The meeting was coming just days after Saraki met with the former military president, Ibrahim Babangida, at his home in Minna, Niger State.

Saraki went to meet Obasanjo in the company of his Special Adviser on Media and Publicity, Yusuph Olaniyonu, and he refused to speak to Journalists on the agenda of their meeting as well as on the crisis ravaging the National Assembly when they approached him after the meeting.

But the Senate President said he was on a visit to the Presidential Library because he missed the commissioning of the structure. He said after his assessment of the library, he could confirm that it is a worthy project.

Tambuwal’s visit was not unconnected with his aspiration to vie for the presidency in 2019.

The duo both met at the Asokoro Abuja residence of the former vice president and according to sources close to Atiku, it was a courtesy visit.

Also, Paul Ibe, the media adviser to the former vice president, confirmed that Tambuwal was at Atiku’s residence.