Coordinator, All Progressives Congress (APC), has urged politicians aspiring for any political position to bury such ambition if they don’t have money to the fund their campaign.

Mrs. Modesta Nwaogbaga said this On Saturday, August 11, while addressing women in Abakaliki, Ebonyi state capital during the APC women stakeholders meeting in the area.

Mrs. Nwaogbaga is the Coordinator of the 2019 Buhari/Osinbajo Campaign Initiative for Ebonyi. 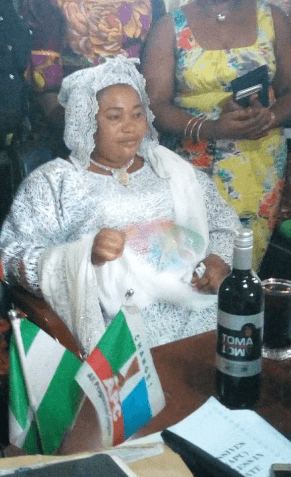 She warned politicians not to borrow money to contest elections, stressing that at the end they may not even win, and even when they won, they would be indebted to their creditors throughout their stay in that particular seat.

The Coordinator also warned women to stop pushing their husbands to contest for political positions, most especially for Ebonyi governorship when they know that they are not capable financially.

She said Ebonyi women would only support those who would care for them and accord them their deserved respect.

Mrs. Nwogbaga, also said the meeting was a platform to reach out to women with a view to sensitizing them on the need to participate actively in the forthcoming general elections.

She encouraged the women to register and collect their PVCs, while advising them to resist vote selling, intimidation and harassment, adding that the APC-led administration was committed to enhancing the capacity of women in politics.

She urged Ebonyi women to support the President Muhammadu Buhari-led Federal Government to enable the administration continue in its delivery of democracy dividends to the people. And to vote for credible candidates under the APC platform for the various elective positions in 2019.

Stating: “Under the APC watch, the capacity and political potential of women politicians are being enhanced and deployed to produce governors, more Senators, House of Representatives members, state legislators and even the president of this country.”

“I urge you to support those who are qualified, credible and electable to emerge as our party’s flag bearers in the forthcoming 2019 elections.

“I plead with my fellow women whose husbands are aspiring but do not have what it takes to win elections, to drop the idea.”

Nwachukwu said the gesture was to encourage more women politicians to get involved in elective political activities, and to show that APC is gender sensitive.

He hinted it wasn’t the first time the party was coming up with such gesture as there were free nomination forms for women during their recent concluded congresses in the state.

He urged the women to resist all forms of intimidation, monetary inducements and harassment from desperate politicians.

He charged them not to sell their Permanent Voter Cards (PVCs), as such would mean selling their right.

While he told the women to guide their children and ensure they resist being used as political thugs as the 2019 general elections are fast approaching.

He commended the women and organizers of the meeting and urged them to make the women’s gathering more regular.

“We are promising that our great party will give out free nomination forms to women aspirants in the forthcoming 2019 general elections in Ebonyi and this is in line with our party’s policy.

“The gesture is to demonstrate that our great party is gender sensitive and also intended to encourage more qualified women to participate actively in elective political positions.

“Women were given free nominations during our congresses and we are going to demonstrate a similar gesture in the election because women have more numerical strength and vote more than men during elections.”

“You must not sell your voter cards because your PVC is your power and legal mandate to make the change we all need.

“Those who are yet to register should go and register, while all who registered but have not obtained the voter cards should go to the INEC local government area offices to collect them,’’ he added.

On her part, wife of the former governorship candidate of the Labour Party in the 2015 elections, Mrs. Mary Nkwegu, urged the women party leaders to move into their various wards to educate, sensitize and mobilize grassroots women on the collection of their PVCs.

She assured President Buhari that Ebonyi women are with him and will massively vote for him in 2019.

She urged the women to register and collect their PVCs as such is the only thing that qualifies them to vote.