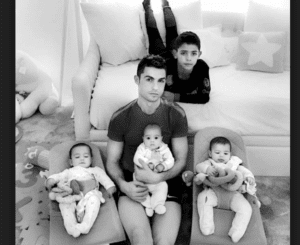 Back in 2010, when Ronaldo was just 25, he went to his social media to announce that he had just become a father of a little baby boy. Cristiano Ronaldo Junior was born in a private hospital near San Diego, California, United States to an unknown woman. To this day, her identity is being kept secret, as she wanted to remain confidential. People have been speculating about that, some claim that it was a surrogate. Despite all the questions and rumours, Cristiano has not revealed the identity of this woman. His sister once said that the mother of Cristiano Jr. was of Mexican origin, but that is by far the most information available about her.

According to the rumours, Ronaldo had to pay £10 million to gain custody of the child. That said, nobody knows for sure, but the boy was taken by Ronaldo Sr.’s mother Maria Dolores to Spain right away, and he spends most of the time with her these days.

Now, the boy is only eight years old and he is already following in his father’s footsteps – football and modelling. His father revealed that Cristiano Ronaldo Jr. was the best goal scorer at his school. In addition to that, both of them appeared in the ad campaign for the CR7 Denim Junior collection (CR7 is Cristiano Ronaldo’s own brand). That’s all there is to know about him at this young age.

Cristiano’s twins, Mateo and Eva Maria, were born in June 2017, while he was playing in the Confederation Cup. His babies were born at the same hospital near San Diego as their older brother was. Before then, Ronaldo had already broken up with his long-time girlfriend Irina Shayk and did not appear to be in any kind of relationship. This time, the theory that he used a surrogate mother was confirmed, but her identity was not revealed to the public.

Both Mateo and his sister Eva Maria are still too little to have done anything that would be in the news, as they have just celebrated their first birthday.

Ronaldo’s youngest child Alana Martina is not even a year old yet, so more will be uncovered about the younger kids as they grow older.