In a statement to the press signed by the National Publicity Secretary of ANN, Akinloye Oyeniyi, the party said it is another epoch in the political history of our dear nation, Nigeria, as the nine months old political party produced its first serving political office holder in the person of Honourable Maria Ude Nwachi, the Member representing Afikpo North-East State Constituency and the former Minority Leader in the Ebonyi State House of Assembly.

The statement reads “Today Thursday 6th day of September, 2018 is a significant day in the political history of Nigeria and our dear party, Alliance for New Nigeria, ANN, as the party is welcoming into its fold the  honourable member representing Afikpo North-East State Constituency and former Minority Leader of the Ebonyi State House of Assembly, Honourable Maria Ude Uwachi at her ward in Afikpo North Local Government Area of the state, making her the first serving political office holder of our party. 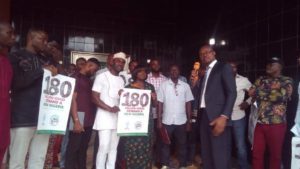 “To many, political parties have merely been vehicles of thuggery and social disturbance, but as Nigerians have seen for themselves, the  coming of ANN is not only to want to exercise government power by winning political offices, but to also serve as the true political party for government and political recruitment, interest articulation and aggregation, political education, goal formation, link between governments and the people, political representation of all and sundry and making governments accountable to the people.

These and many other qualities are what has been endearing the party of difference to multitude of people across all divides which Honourable Nwachi that declared ANN as a better platform with good ideology where her impacts can be felt, is one. We have seen her performance and have listened to her people back home, and from their own mouths, they have confirmed she is a community development enthusiast and popular grassroot mobiliser loved by her people.

“Her joining us is not a shocking occurrence to ANN members and large supporters because we share same ideology of selflessness and altruistic community development traits. Honourable Maria as young as she is in a rare exhibition of selfless service to her people and community, as the Minority Leader of Ebonyi House of Assembly, refused riding in her official Toyota Prado but sold the SUV to provide badly needed amenities and seed funds to traders and artisans in her constituency.

This is what ANN is for. This is same reason you see the party having five presidential aspirants, numerous governorship, senatorial, representative and state assembly aspirants as young as the party is,; Oyeniyi said.