Ebonyi state Government has raised alarm over the selling of poisonous rice in the Abakaliki rice mill.

The development has led to the Closure of the facility until an investigation into the matter is concluded.

The Senior Special Assistant to the Governor on Internal Security, Kenneth Ugbala on Tuesday announced the sealing while briefing newsmen on the out come of the executive council meeting. 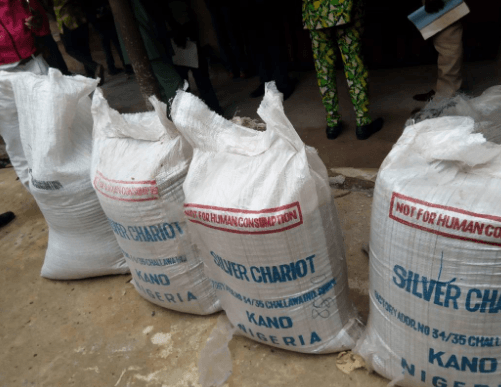 Ugabala said that adulterated rice was being sold at the popular Abakaliki Rice Mill, adding that the report was brought by the state ministry of Environment.

He assured that the market will be reopened as soon as the mill is confirmed to be free from adulterated rice.

He said some of the rice confiscated were labeled ‘not for human consumption’.

It was also announced at the briefing that Ebonyi state government has been given the approval to commence the construction of the Abakaliki ring road.

On her part, the Commissioner for Commerce and Industry, Mrs. Ugo Nnachi hinted the Council also terminated the procedure for the disbursement of the SME loans which was being handled by Bank of industry.

She said it will now be handled by the ministry to ensure speedy disbursement to benefiting SMEs in the state.

Mrs. Nnachi revealed that the decision for the ministry to handle the disbursement process was due to the delays and inability of the BOI to carry out the disbursement since the funds were raised and lodged with the bank by the state government.

Meanwhile, the state Commissioner for Sports and Youth Development, Hon. Akpuenika said N52 million has been approved for 2018 sporting year in the state.

He stated that three sports competitions have been slated to take place in Ebonyi before the end of the year.

He mentioned the tournaments to include,  the David Umahi Tertiary Institutions Games, DUMTIGA 2018, for ten tertiary institutions in the state, School Sports Competitions which will hold in October and the Divine Mandate Football Competition for all the 171 wards in the State.

For the DUMTIGA games, he revealed that N500,000 has been disbursed to each of the participating institutions to enable them to prepare and take part in the games.