He was reacting to a statement by Buhari’s Senior Special Adviser on Media, Mallam Garba Shehu, issued in reaction to the July 14, election, entitled: “Fayose: In the end, a high-powered nothing.” 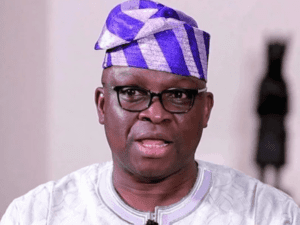 The governor who reacted through his Chief Press Secretary, Mr. Idowu Adelusi, in Ado-Ekiti, maintained that Buhari is not a Democrat, adding that if he was he would not have supported a situation whereby the will of the people was subverted through the use of brute force.

He said they will reclaim the stolen mandate.

“President Muhammadu Buhari should not be happy and applaud this situation whereby the police, army, civil defense and INEC were used to snatch the collective mandate freely given to the Peoples Democratic Party candidate, Professor Kolapo Olusola and delivering it to the All Progressives Congress candidate which Ekiti people rejected.”

He continued: “Can you call that election? Of course not. It was a contest between Olusola and the INEC and security agencies.

“There was an indiscriminate arrest of our party leaders, harassment and brutalization of voters in a massive scale especially in Ado Ekiti, Ikere and others areas. The thugs imported by the APC operated freely under the cover of security agencies to snatch ballot boxes, create confusion, cause mayhem and drive away voters in PDP strongholds. Our party agents were driven away with gun

“Buhari has demonstrated truly that he is not a Democrat, but a dictator who is yet to get over military mentality. Muscling of democracy in Nigeria today by the Buhari administration is not about Ekiti alone. Presidential aspirants and PDP states should prepare to have a taste of brutality of this administration. This is why we all need to stand up to rescue Nigeria from Buhari.

“I am Peter Ayodele Fayose, I hold my head high. I can never be suppressed. I don’t lose battles and I will not lose this. I will laugh last. Those waiting for me will wait in vain. They should remember what the prophet said to that heady king in the Bible, which applies to them. ” He that wears the armour should not boast as he that removes it. ”

“It is only Buhari that will pride himself with the security shooting sporadically at polling centres, scaring people to pave the way for the APC thugs to snatch ballot boxes.

“What Buhari has won as referendum from Ekiti people, Nigerians, and the international community is shame. If APC has truly won, why is it that there is no jubilation in Ekiti?.

“The victory of Kayode Fayemi is pyricc. We will reclaim the stolen mandate in the court by the power of God

“Garba Shehu was in the Presidency courtesy Alhaji Atiku Abubakar for eight years and came back for this current dispensation still courtesy Abubakar. Now, he has abandoned the person who brought him to the limelight.

“This is not surprising when he was the President of the Nigerian Guild of Editors during the regime of General Sani Abacha, he wined and dined with the maximum ruler. He would go under the cover of darkness to collect money purportedly for editors, but everybody knew what he did then. Nigerians are waiting to nail him in the end.”