Benue State Governor, Samuel Ortom has announced his exit from the ruling All Progressives Congress (APC).

He said this at the banquet hall of the Government House in Makurdi, on Monday, during the swearing of his newly appointed Special Adviser on Local Government and Chieftaincy Affairs, Jerome Torshimbe.

Ortom said that the APC had already sent him out. 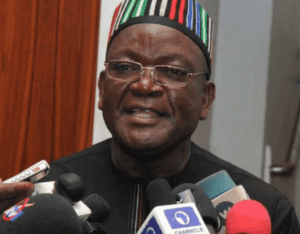 However,  the governor is yet to disclose his new party but said he has been consulting with relevant stakeholders and will soon announce his next move.

“I don’t know what will happen next, but I’m waiting. If others approach me, then I will tell the Benue people that I’m joining another football club,” he stated

He noted that the crisis rocking the state would soon be over, adding: “Many people have been wondering that though we dedicated the state to God, we are still facing challenges; but all these challenges that we see today, we shall see them no more.”

He also called on his people to remain united, law-abiding and not to allow party or ethnicity cause diversion among them.

“Let party or ethnicity not divide us. I’m a child of destiny and it’s only God that will decide what I will be. These challenges that we see today, we shall see them no more. All that we are required to do is not to begin to be wayward in our conduct but to move to the righteous side of God. Once we do that, things will work out for our good.”

Ortom charged the newly appointed special adviser to justify the confidence reposed in him through hard work and commitment to duty and to imbibe the core values of his administration which include transparency, accountability, justice, and equity.