The Minister for Power, Works and Housing, Babatunde Fashola, has set the record straight on how long the Third Main Land Bridge Lagos would remain shut down.

Fashola disclosed on Monday, July 16, on Channels television morning programme ‘Sunrise Daily’, that the Third Main Land Bridge would only be shut down for three days, not 27 months as being speculated. 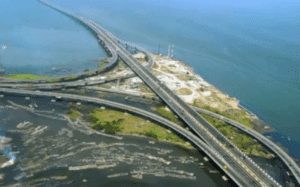 He revealed that the bridge would be closed down starting from July 27, while stating that some people mistook the date.

“I think somebody mistook the date 27th of July for 27 months, I don’t know how that came about but there was a signed statement from my office and it didn’t contain 27 months.

“The statement we put out was that it was going to be closed for three days, from the 27th of July. We were torn between maintenance and safety and people’s convenience but essentially, the first three days at the end of this month as issued in our press statement will be for investigative work to be conducted to assess the current condition.

“There is a procurement for maintenance that has been approved but between that time and now, some things may have changed so we wanted to do an examination again just to be sure that there has been no material deterioration beyond what we procured.

“After that, our engineers and contracting firms will then lay out the plan of works. Some of the equipment and materials have to be imported, either later in the year or early next year, then we will be able to start the repair.

“That will imminently compel some closure as we have had in the past when I was governor. We closed it for about 12 weeks but (this time) we will try to reduce the period of closure as much as possible.”

“This is a choice between people’s safety ultimately. That bridge must not collapse, and it needs maintenance. It has been built now for about 30 something years.

“If you recall, the maintenance that was done at the time wasn’t completed because the budget was cut. That was why they now did it in phases, so, we are back to what we should have done before. It is costing more, but it needs to be done.”

“The first 3 days is what I can speak of now. At the end of this, we will come back to the members of the public and say to you definitively, based on the outcome of what we get from this assessment, how long it is going to take.

ALSO READ:   At Last, NBC Bans, 'This is Nigeria', as Falz Reacts

“I’m not in a position to say that now until that report comes back to us but what will happen at the end of July is three days,” he noted