These condiments have been saving lives as far back as 500 years ago. Combining them together to create a drink or tea is more effective than using them as condiments.

We will give you two nice recipes shortly after outlining the health benefits of the mixture. 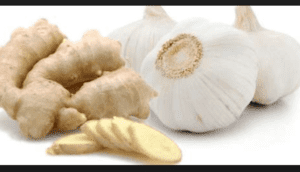 Both ginger and garlic are known for their natural, antibacterial characteristics, and their ability to relieve congestion and loosen phlegm. So, ginger relieves congestion, softens aching muscles, and can soothe a sore throat. Garlic is considered to be an antibiotic and is often recommended for treating flu and colds. While being used together, either in a supplement form, as a tea, or in meals, such as stews and soups, the combination of garlic and ginger can become an effective and beneficial medicine, when cold attacks.

Digestion plays a key role in keeping you healthy. Ginger can be helpful in digestion by controlling high sugar levels. In the case where these sugar levels are very high, the stomach will not be able to work as it should. So, ginger stabilizes the stomach bringing it to a normal condition. Garlic has been thought to keep the digestive system running smoothly and is particularly helpful in cases of swelling or irritation of the stomach.

Both ginger and garlic have medicinal characteristics, which allow them to reduce blood clotting. According to Motley Health, it was claimed that ginger has been shown to reduce 60% of the production of thromboxane, which is a forceful blood clotting stimulant. Garlic also induces the blood vessels to increase, reducing blood pressure, as well as keeping the blood from clotting.

Diarrhea is a rather difficult problem to have, but from scientific researches, both garlic and ginger can help to overcome the symptoms of diarrhea. As for ginger, it helps with any stomach gas and spasms, and garlic is able to even destroy all harmful bacteria, which are in your intestines.

In general, ginger enhances blood circulation, which can immediately improve the male stimulation. It has also been listed as an aphrodisiac and ginger has been scientifically proven to enhance sexual desire. Garlic also has been used throughout centuries as an aphrodisiac and has been known to enhance libido and stamina. So, it is believed that garlic can help in the situation of impotency, and such a treatment continues in many communities till today.

Drinking ginger tea can diminish or control swelling. According to the University of Maryland Medical Center, ginger plays a great role in decreasing inflammation and has been used for this goal by traditional medicine for many years.

According to the American Academy of Rheumatology, ginger contains natural ingredients, which are similar to those found in FDA-approved over-the-counter anti-inflammatory combinations. Also, ginger can help to reduce your arthritis pain. However, make sure that you don’t drink too much ginger tea. Excessive ginger consumption can lead to the inflammation of your stomach and intestines.

7) Relief of flu and cold symptoms

Actually, drinking ginger tea can help decrease your cold symptoms. Ginger is thought to be the best medicine for colds in Chinese ayurvedic and traditional medicine. In general, ginger has antiviral characteristics, which can help to fight cold symptoms.

Eating garlic during the cold season is a great way to boost your immune system and keep off colds and flu. The old folk remedy is to eat a garlic bulblet, which is garlic that has been immersed in honey at the first sign of a cold.

When it is bruised or crushed, garlic produces Allicin, which is a sulphuric ingredient that is a natural antibiotic. During the 1st world war, soldiers used crushed garlic on infected wounds gained in battles. So, if you decide to consume garlic in a tablet form, it will be much better to take powdered capsules. Because the processes used to produce garlic tablets, usually destroys the Allicin, which is very important.

10) Prevention of numerous kinds of cancer

Prostate cancer, bladder cancer, breast cancer, stomach cancer, and colon cancer have all been shown to have their tumors decreased after being treated with garlic and ginger.

According to the University of Maryland Medical Center, ginger can be used to support and nourish your cardiovascular health. Ginger is thought to be a natural blood thinner, as it makes your blood platelets less adhesive. It averts blood clotting. On the other hand, this can help to reduce your circulatory problems and blood cholesterol.

For the cardiac tonic preparation, just mix one cup of boiling water with one to two teaspoons of freshly squeezed ginger. Actually, the LDL cholesterol and the aortic plaque depositions, which gather on the walls of your body’s veins can be treated with garlic.

Ginger’s effectiveness against headaches has been proven. Ginger has been shown to decrease the severity of headaches by blocking prostaglandins (the chemicals, which can induce inflammation in the brain blood vessels). In addition, this anti-inflammatory power in ginger can lower the discomfort of headaches, flu, and colds. Ginger is also the best remedy when it comes to stuffiness and bronchial congestion. The main compound, the gingerol, is a natural cough suppressant.

Ginger decreases the blood sugar levels. Actually, drinking 1 tablespoon of ginger juice mixed with 1 glass of water in the morning can help to control the sugar level. Garlic can also control blood sugar as it strengthens the level of insulin in the blood. This can help in the control of diabetes.

Honey has antibacterial characteristics, which can help to speed up the healing process of the garlic and ginger. Also, it can draw water out of inflamed tissue, therefore leading to a decrease in pain and swelling.

You can put as much ginger to the pot, as you want. In a case when the tea is too potent for you, just water it down by adding some boiled water to your portion. Residual pieces can be eaten or used for future extracts.

This is a good remedy for several diseases. You need to mix two tablespoons of it into a glass of juice or warm water. The best dosage is two times per day, but make certain that one of them should be at night about an hour after supper.