President Mohammadu Buhari has replied the United States President, Donald Trump over a statement credited to him where he referred to the Nigerian president as “lifeless”.

He reacted through a group, the Buhari Media Organization (BMO), on Monday, which claimed that President Buhari is fit and capable of contesting the 2019 election.

The statement was signed by Niyi Akinsiju and Cassidy Maduekwe, the  Chairman and Secretary of the party respectively. 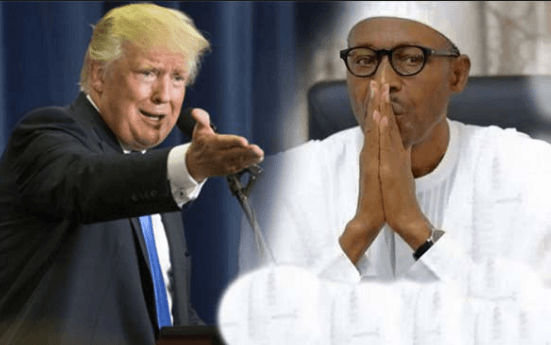 Stating: “President Muhammadu Buhari is fit and capable to run for the 2019 elections and oversee the affairs of the country for four more years President Donald Trump’s hate speech notwithstanding”.

It noted that this was not the first time Trump directed such demeaning remarks at World leaders, stressing that President Buhari would not be distracted by such.

“We are aware that President Trump’s disrespect for World Leaders is not new; his comments on Canada’s Prime Minister, Justin Trudeau, calling him ‘meek and mild’; his reference to Germany’s Leader, Angela Merkel’s actions as ‘insane’, or his outlandish Tweet at the UK’s Theresa May, and more recently, the alleged remarks he made after meeting President Buhari.

“It is indeed not the first time President Trump would be heard to lower the standards of respect for his colleagues on the World Stage. We are not surprised, we know that this age-long character of the US President would not change anytime soon. But it is important that we put it on record that President Buhari remains fit and sprightly, even for the next decade”.

“We recall that during President Buhari’s visit to Trump in the White House, the US President commended the successes that the Buhari administration had recorded especially in the fight against insurgency and the war on corruption.

The US President was full of admiration for Nigeria’s President during the visit, thus such outlandish remarks as reported by the Financial Times are not just to be taken with a pinch of salt but are untrue in themselves,” it stated.