Ebube Nwagbo is a stunning Nollywood character. She has featured in several movies from epic to modern. Little wonder everyone wants to know her biography. How did Ebube Nwagbo get to where she is today? Is she married or not? You will find out all the juicy details concerning Ebube in this article. 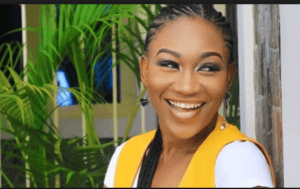 Ebube Nwagbo was born on 24th February 1983 in Anambra State (South Eastern Nigeria), but then her family moved to Warri in Delta State. She has a big family: she is the oldest in a family of six. She studied Mass Communication in the Federal Polytechnic Okoh in Anambra State. Ebube obtained a National Diploma and continued her education at Nnamdi Azikiwe University.

Finishing the study, twenty-year-old Ebube decided to become an actress. She started featuring in minor roles. In fact, she featured in a lot of minor roles as fame does not come so fast and easily. In general, Ebube Nwagbo has had more than 150 roles. Currently, she is one of the most recognizable and well-paid actresses in Nollywood. Her earning ranges from two million naira per movie. The most famous movies with her participation include:

An interesting fact is that for Widow’s Cult she was to shave her hair. The movie directors paid her handsomely for that, she was paid 7 million nairas.

Nevertheless, Ebube Nwagbo biography does not contain any miracles or lucky events – all she has she got by patience and hard work. Now her estimated net worth reaches $700 000, and this fact makes Ebube one of the richest actress of Nigeria.

Ebube Nwagbo is also a fashion icon. Being chic and trendy, Ebube Nwagbo designed the collection of sunglasses and the line of hair extentions called «Posh Hair». In this case, talented actress Ebube Nwagbo showed herself both as a designer and a business lady.

There has been a lot of rumors trailing this part of her life. This is common with every popular single actress. There were recent shots of Ebube Nwagbo wearing a wedding dress, it raised a lot of dust. But it turned out to be part of her role in a movie titled “Anniversary”. She has also been linked to many popular guys such as  Kanu Nwankwo, Ogbonna Kanu, Emanuel Emenike and Kcee. But the truth is that Ebube Nwagbo is still single! In her numerous interviews, she states that it is up to God to decide when and how things must happen. So, let her fans keep looking forward to it for its certainly inevitable!