Highest Currencies In The World: Little time should be given to studying the currencies of the world rather than in the spending. Each country has its currency and the development of the country has an import on the value of the currency. People only know the value of other countries’ currency during an exchange. 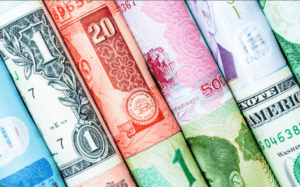 Meanwhile, the United States Dollar has the highest demand in the world; basically in all the countries of the world, but it is not the most expensive as may be perceived. Ratings as per currencies and its value are regularly put together. For all currencies, we have taken exchange rates from the XE Currency Converter and the top ten most expensive currencies in the world are as follows:

The Dollar rate is approximately 360.473 Naira per dollar. It fluctuates very often, although as mentioned earlier it has the highest demand.

This is the national currency of Switzerland and Liechtenstein. 1 CHF price is 374.707 Naira. The Swiss franc traditionally refers to the currencies which are used in tax havens or offshore zones, with no inflation.

One Cayman Islands Dollar exchange to Naira currently is 439.621 NGN. It is indicated by a special KYD symbol. This dollar was officially introduced to the money market in mid-1972 and is now successfully used. The Cayman dollar changes when there is a parallel change in currencies of the world.

Euro is known to be the primary money unit of the European Union, which includes a huge number of European countries. Its special designation is EUR. The rate of this currency in relation to the Nigerian Naira is approximately 442.100 NGN. Due to the prevalence of the EU, the Euro has become extremely popular all over the world.

This currency lately made the list of the most expensive money in the world. Gibraltar Pound, which is abbreviated as GIP, is on the level of British pounds, and this is the reason why it is trading at the same rate as the United States dollar. Gibraltar Pound appeared in 1934. The rate of the Gibraltar Pound relatively to the Nigerian Naira is approximately 496.673 NGN.

One of the most expensive and famous world currency is the British Pound (GBP). It is often used in the international trade operations. It circulates every day in the UK, as well as in Northern Ireland. Nowadays, approximately 496.722 NGN is the rate of one pound. GBP is constantly being enhanced in value compared to the other world national currencies. It is important to notice that different administrative areas of Great Britain have banknotes that look differently. This fact does not contradict the modern country legislation, and the money can be accepted in different banks worldwide.

Jordanian dinar is another expensive and popular currency. It costs about 508.441 NGN. This currency is known by the abbreviation JOD. It started being produced and was put in common use in late 1949. Soon enough, it outperformed the Palestinian pound. There are images of royal family and beautiful design on this banknote, so its style is definitely considered outstanding. The banknote has some inscriptions in the Arabic language. With this currency, it is very much possible to perform profitable operations on the worldwide trade market.

This currency is ranked third among the most expensive currencies in the world. It is shortened to OMR. One Omani rial equals about 937.541 NGN. This is the first banknote that has messages in English on one side, and signs in Arabian on the other side. Omani rial went into circulation in late 1979, replacing Saidian real. Their design is one of the most beautiful and attractive banknote designs.

ALSO READ:   The Best 3 Recipes for your Tiger Nut Drink

Currently, one Dinar equals around 958.735 NGN. Earlier, the Indian rupee was the national currency of Bahrain. Starting from mid-1959, the banknote called Persian rupee has been circulating in the country. After six long years, Persian Rupee totally lost its price, and the government of Bahrain made a decision to create their own currency. It is written as BHD. Bahraini Dinar is usually widely used in the worldwide oil trade operations.

The highest currency in the world, as of today, is Kuwaiti dinar. This currency is abbreviated as KWD. The price of one Kuwaiti dinar equals approximately 1,197.92 NGN. Statistically, the general population of Kuwait is about 3.1 million people. It is interesting that one in seventeen people in Kuwait is considered to be a millionaire depending on this person’s income per year. This country is wealthy and prosperous, and 10% of the world’s oil reserves indicate that.

Furthermore, the value of Kuwait’s national currency keeps growing every year compared to many other currencies which are falling. The Kuwaiti dinar was introduced to the market in the middle of 1961. Before that, the country used the Indian rupee. It was considered the first and main currency of the State. Now, Kuwait’s dinar is the most valuable currency in the entire world in relation to Naira and a huge amount of other modern global currencies.

Every trader needs to know about the primary currencies and the possible changes in their rates because they play a large role in world commercial trade.