The incident happened when the victim, Mrs. OluchiIgwe, 26-year-old tried to pour adulterated product into the kerosene tank of their local lantern, but unfortunately, the lantern exploded and her cloth caught fire. 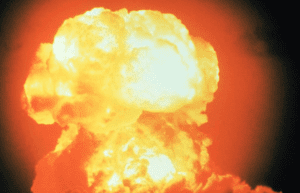 She was burnt in the process and while the husband, Mr. Ifeanyi Igwe, was trying to quench the fire in other to rescue his wife, he was seriously affected, yet his wife didn’t survive.

Speaking with the elder brother of the victim, Mr. Friday Igwe, he regretted that the efforts to save the life of Mrs. Oluchi could not bear fruit as she later died at Uzodinma Hospital Onueke on Monday, June 25, 2018.

On his part, the father of the victim, Mr. Simon Igwe described the incident as a calamity to the family.

He pointed out that the kerosene was adulterated; adding that his daughter-in-law had lost her life because of that, while the husband sustained the life-threatening injury.

The family appealed to public-spirited individuals and the state government to come to their aid and save the life of their son, Mr. Ifeanyi and that of their six months old baby the wife left behind.

ALSO READ:   We'll leave APC With or Without Saraki- R-APC, Gives 7 Conditions that Can Stop Defection

In an interview with some kerosene dealers in Eke Imoha market, Mr. Augustus Mgbada, and Kelechi Nworie, they admitted that most of the dealers do sell adulterated products.

They said they dont have any union to checkmate the activities of kerosene dealers in the area while appealing to security agents in the state to look into the activities of petroleum products dealers to forestall such ugly incident.

Meanwhile, the Senior Special Assistant to the Governor on Internal Security, Dr. Kenneth Ugbala, has on behalf of the state government, expressed sympathy to the family of the deceased and wished the affected one quick recovery, assuring that government must do everything possible to stop the importation of adulterated petroleum products into the state.

Stating, It is unfortunate that such an incident will take place in Ebonyi State. From the inception of this administration, the government has put up some security checks and some task force on the road headed by SSA on Petroleum and the idea is to know the type of crude oil including petrol, gas and kerosene that are being brought into the state. The task force has been operating in conjunction with Nigerian Civil Defense who has the mandate of taking care of technical infrastructures and other services that are connected with crude oil. But getting this story now is uncalled for.

ALSO READ:   Osinbajo in War of Words With Nigerian Pastors

The implication now is that we are going to review the operation order of the task force because the lives and properties of our people are very important to us. We have to start entering into our markets with the task force to checkmate and ensure that adulterated liquids are not sold in the market.

Dr. Ugbala maintained that Ebonyi State is known for the best and that standard cannot be toiled with. Stressing that any dealer on petroleum or other liquids found selling adulterated products, his license will be withdrawn and the government will seal off the company, while defaulters will be prosecuted and punished in line with the law.