Drama and theatre have come a long way. The movies we celebrate and watch in cinemas today, developed from ancient drama. The word “theater” comes from Greek ei azpov.

The main meaning of it is a place for spectacles. One can now understand where the word ‘spectators’ originated from; since people normally gather round to watch drama whenever it’s being acted. 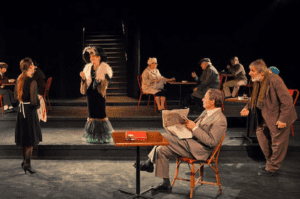 The theater is a synthetic art. It combines expressive means of literature, music, painting, architecture and other arts.

The first theater in Rome was built in 52 BC. It’s important to trace things back to its origin so one can easily understand why things are the way they are now. You might learn a thing or two from the origin of drama and theatre.

The effective nature of the theater is reflected in drama, which is the content of the theatrical performance. History of drama also began in Ancient Greece. The origin of the elements theater occurred in the oldest rites and plays reflected the work processes. There were myths at the heart of these ideas – tales of gods and heroes. The performances in the ancient theater were devoted to such cult personalities as:

Demeter and Dionysus in Ancient Greece and many others.

Before theater and drama developed in Ancient Greece, lyrics and epos were very popular. The birth of Greek drama and theater is associated with ceremonial plays that were dedicated to the gods-patrons of agriculture. Sometimes such rituals turned into a cult drama. For example, during the mysteries in the city of Eleusis there were plays of marriage of Zeus and Demeter, abduction of Cora by Pluto, roam of Demeter in search of her daughter and return of Cora.

Dionysus was considered the god of creative forces of nature. Later he became the god of winemaking and then the god of poetry and theater. The symbols of Dionysus were plants, especially the vine. On holidays dedicated to Dionysus, not only solemn, but also merry carnival songs were sung. The mummers who formed the retinue of Dionysus arranged noisy fun. The participants of the festive procession smeared their faces with wine. They also put on masks and goats’ skins because Dionysus was portrayed as a goat.

In VI century BC the drama reached a considerable development. Ancient history claims that the first Athenian dramatic poet was Fespid (VI century BC). The first staging of his drama (its name remained unknown) was held in the spring of 534 BC. This year is considered to be the year of the birth of the world theater.

One of the most famous dramatists from Ancient Greece was Sophocles. According to many sources, he was from an affluent family. His father was the owner of the weapons workshop and he was given good education. The world got only seven of his dramas but he wrote over 120.

Aeschylus’s main heroes were gods but Sophocles described people in his works, although somewhat detached from reality. The Greek theatre and drama in Sophocles’ works reached its perfection. He introduced the third actor in ancient theatre, increased the dialogical parts, and reduced the chorus’s parts. The action became more lively and reliable because three characters could simultaneously act and give motivation to their actions on the stage.

Origin of African drama and theatre

Actually, African theatre, as well as other kinds of arts, appeared when the British came to Africa. This nation embodied many of its ideas in this continent. These ideas were associated with such industries as religion, art, politics, education, economy and many others. Although the traditional African drama was in the form of folklore, it also had something from the British drama too.

African drama and theatre were created on the basis of historical and traditional forms of art. There were sacramental performances, dramatized stories, modern combinations of theatre scenario which characterized by a traditional technique of performance. Since the traditional African theater and drama were rich and diverse, they were used as a way of the nation’s self-expression. This helped to expand both the rights of ordinary citizens and protect them from political and social attacks.

One more important thing that was peculiar to the African theater at the initial stage is a demonstration of African values. It is interesting to note that the ancient theatrical art significantly influenced the modern African literature.

Literacy in Africa began to develop intensively only in the 20th century. Before this period, these texts were stored in memory. In other words, African actors recited them.

Colonization period in Africa and theatre

During this period, many types of theatrical art were suppressed and even forbidden. Someone even forbade plays about the worship of God. Although others, for example, missionaries tried to bring Christian values. They organized plays based on the Bible, stories of believers and many others.

Regarding the reaction of the audience, such troupes as coteba in Mali and Yoruba in Nigeria had the most interesting performances. Today, they are also considered as the most successful theatres.

Thus, we can conclude that the African theater and drama (including Nigerian) has a more realistic and fighting character. Africans tried to demonstrate their political and social events in their theatre. They showed their relationships with the government, nature, within the family. Although in Africa there were also dramas dedicated to pagan gods.

As you can see, the origin of drama and theatre is really diverse in different countries. However, these phenomena are equally important to each nation. The theater and drama rightfully can be considered one of the oldest strongholds of human culture.

In one form or another, it took its place in the cultural tradition of every nation. The role of theater in the life of human and society differ depending on the time (era) and the goal pursued by theatrical figures. For example, Ancient Greece emphasized the development and moral cleansing of viewers. African theatre tried to impart values, seek the truth and fight for their rights.

In any case, the main function of theater always has been entertainment. All the rest, that is, educational, enlightening, propaganda features can be portrayed in an entertaining manner too. Hence, from time immemorial theater satisfied the natural need of humans in spectacles.