Saraki, Ekweremadu: The All Progressives Congress (APC), has continued in its tireless search for senators that will replace the Senate President, Bukola Saraki and his Deputy, Ike Ekweremadu. 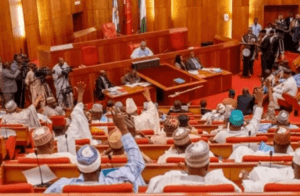 The ruling party is fighting really hard to regain control of the Senate after the defection of Saraki.

APC Senate caucus after its meeting on Friday, was considering either of these three-Senator Abdullahi Adamu; former chairman of the Northern Senators’ Forum, Senator Ahmad Lawan, the Majority Leader, and former Majority Leader, Senator Ali Ndume to replace Saraki as Senate President.

But the Majority Leader maybe the preferred candidate among the three.

While senators Ugborji of Ebonyi state, and Hope Uzodinma of Imo state both from the South east zone were being tipped to replace Ike Ekweremmadu, still from South east.

Recall that Lawan on 2015, was adopted by APC to be Senate president but Saraki had the upper hand after his alliance with the PDP senators, who voted for him and he got 42 of the 53 votes.

Although, there were speculations that Godswill  Akpabio who recently defected to the party is eyeing Ekweremmadu’s seat, while Senator George Akume who is from North Central zone is looking for Saraki’s job. But one of the APC caucus senators said the duo were not yet backed by the party.

He continued: “ Ndume is not among the aspirants. There is a consensus and it is Lawan. There is nothing for Akpabio yet, though he is eyeing the deputy Senate presidency.

While another APC senator insisted that Nduma is in for the job. “Those people you have mentioned, Lawan, Ndume, Akume and Adamu are being tipped to replace Saraki. For Ekweremadu, Uzodinma, Akpabio and Ogbuoji are being considered,” he revealed.

But the problem APC may encounter as they shop for candidates to do the job is the geopolitical zones of those they want to replace Saraki mostly.

The party leaders after the meeting, adopted in principle a prototype office sharing formula that would satisfy all vested interests within the party.

According to one of the caucus members: “After deft negotiations, the leaders agreed to cede the position of the Senate President to the North-central and that of the Speaker of the House of Representatives to the North-east. They also endorsed a zoning arrangement that would see the South-west producing the Deputy Senate President and South-south, Deputy Speaker.”

With that agreement, the then Minority Leader, George Akume from Benue State and Senator Bukola Saraki from Kwara State were candidates for the job as the seat was zoned to their geopolitical zone.

ALSO READ:   What APC Govt. destroyed within 3yrs is more than what military did in their many years of dictatorship- PDP Chieftain

But with the recent proposed endorsement of Lawan by APC, the geopolitical zones will be altered. Saraki is from Kwara State (North-Central), while Ekweremadu is from Enugu State  (South-East).

Lawan from Yobe State ( North-East), while Ndume from Borno State, (North-East), and Adamu is from Nasarawa State (North-Central).

Speaking on the choice of the national caucus, a senator from the South-West, said that the APC might insist on Lawan, having being its candidate since 2015, adding that some members of the caucus were also considering Senator Sonny Ogbuoji who is from Ebonyi State (South East) to be deputy Senate president.

He said, “Yes, Lawan has always been the candidate of the APC, but for his deputy, some of us prefer Ogbuoji to Uzodinma.  Let us get the two-thirds to sack Saraki first. We should actualize his removal first.”

So, if the Senate President position is given to the North- East, since there are strong opinions that Lawan should be the next Senate President, what happens at the House of Representatives where Dogara is the leader still from North-East?

The North Central will be left with nothing as well as South-East, assuming APC succeeded in using Akpabio to replace Ekweremmadu.

Going by this political calculation, APC should also consider a candidate from North Central to replace Saraki, while also a senator from the South-East zone should replace Ekweremmadu.