Six Sentenced to Death by hanging in Ebonyi

Abakaliki High court has sentenced six suspects to death by hanging for murder and armed robbery. 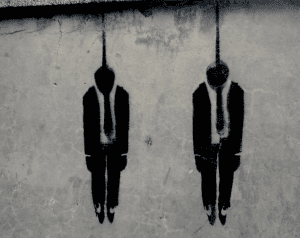 The matter was ruled by justice John Igboji of the Abakaliki High court.

One of the convicts, Mr. Micheal Okwuome, aged 39, was convicted for armed robbery on the 12th day of July 2018 by the High court presided over by justice Elvis Ngene.

He was arraigned on May 26, 2017, before a magistrate court for robbing some students at Legacy hostel Presco campus of Ebonyi State University Abakaliki on the 23rd day of March 2017 of their valuables at gunpoint.

He alongside others at large robbed one Emeka Ezra of Nokia 210 phone, Havren wristwatch, one HP laptop, one techno G9 phone, one superior wristwatch, one black school bag, techno D3 phone, diamond bank ATM card and a library card.

Despite all efforts by Okwuome’s counsel  Marcel Akamabe ESQ, the prosecuting counsel Ijeoma Ajanwachukwu had her way as he was sentenced to death by hanging after the Judge found him guilty, following statement of two witnesses against him and his confessional statement at the police.

He was charged as had committed offenses punishable under section 516A(a) of criminal code cap 33 vol 1 laws of Ebonyi state of Nigeria 2009 and section 1(2)(b) of robbery and firearm (Special Provision) Act cap R11 laws of the Federation of Nigeria 2004.