The Minister of Transportation, Mr. Chibuike Amaechi, has revealed that the Federal government was aware the Governor of Sokoto State, Hon. Aminu Tambuwal will soon leave the All Progressive Party, ( APC) over his Presidential ambition. 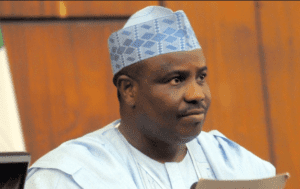 The minister stated this while fielding questions from newsmen during the inspection of Itakpe-Ajaokuta-Warri project in Delta State, adding that APC was not clueless as regards to  Tambuwal’s presidential ambition.

The minister maintained that he entertains no fear as to whether president Buhari will win in 2019, boasting that he will still win even in Sokoto state where Tambuwal is presently ruling as a governor.

“No matter what you do, the governor of Sokoto will leave naturally because he had the ambition of being the president in 2019 and even if you take a chicken to him he will still leave. It is the same with Kwara.”

“These are people you expect they will leave. They left with members of the National Assembly but they came from the areas that the President is very comfortable. Do you honestly believe that the President will lose the election in Sokoto? It is one of his comfort zones.

Amaechi also cleared the coast on the rumour making the rounds that he was not in Buhari’s line up,  stating: “One thing about me in the political history of Nigeria is that nobody has doubt where I stand. One quality I have is that Nigerians believe that I am honest and cannot hide my feelings.”