Yoruba gods: Nigerians are very religious. From the ancient times till now, they’ve been engaged with different gods. The Igbo, Hausa and Yoruba worshipped several gods which had or still has the power to control certain elements to their favor or to the detriment of their enemies. There is the god of rain, thunder, fire and so on. These gods go by different names and artifacts.

Yoruba is one of the most religiously diverse ethnic groups in Africa. Though many have embraced christianity, some still believe strongly in these gods. The Yorubas pledge their allegiance to different gods and goddesses which they believe brought them to where they are today. They refer to God as Olódùmarè, this means a Supreme Deity that lives in the sky. 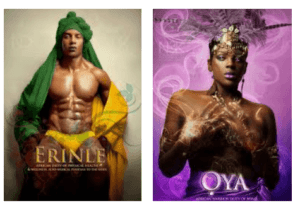 Olodumare is a distant God, and when it comes to everyday prayers, things are often handled by protectors called Orishas. Orishas are intermediaries between the world of humanity and divinity. There are also several types of Orishas which represent particular ideas, objects or natural phenomena. The religion also emphasizes continual feeding and supplication to the deities or Orishas. When one is possessed by an Orisha, one speaks and behaves as though one were that Orisha.

ALSO READ:   How to write Report | Steps To Writing A Comprehensive Report

The number of Orishas according to various sources reaches 40, the popular ones include:

Following modernization trends, many cultures have let go of their gods but Yoruba people still hold fast; maybe as a reminder of their roots. Afterall, what can a culture boast of without their gods?