Ebonyi state governor, Engr. David Umahi has revealed that his administration has uncovered illegal heavy taxation in the state and has decided to put an end to it.

Gov. Umahi disclosed this during the swearing-in of one of his commissioners, Ogodoali Nome, who he said was sacked in error.

He revealed that some of the illegal tax officials have been arrested for the act. 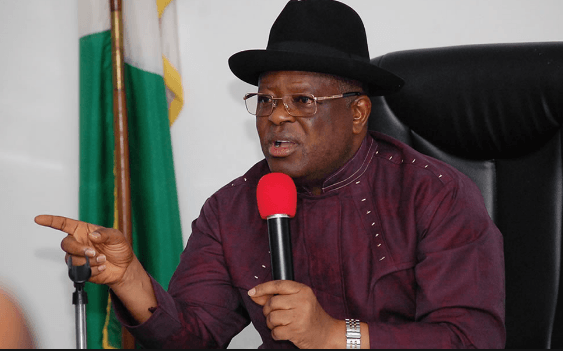 Stating: “There has been a very serious concern in our society whereby our people are groaning under heavy taxation and unfortunately, we are not seeing this money. We hardly get N25 million from such taxation. And so, in the weeks coming, we want to do stakeholders meeting and the stakeholders meeting is going to invite the elders, students union leadership, the labor union leadership, market women and men, the landlords and all the revenue contractors.

“I have directed that all the chargeable revenues should be published ahead of the time on radio and televisions so that on that day, the women will come and say how much they are being charged and the means of collection. We will deploy POS and minimize the issue of collection by cash.

“We are aware of a lot of illegal collection which the society alone can help us and I believe that after that stakeholder’s meeting, everybody will begin to be helpful. We have arrested a number of them and we will send them to the police to charge them to the court and our penalty for such collection in Ebonyi is severe”.

On the initial sack of Ogodoali, he noted that he should have been suspended not outright sack for an offense.

Noting that extreme politics which according to him has dealt with the nation’s political landscape, played out in the Ogodoali’s case and commended him for his patience and believing in his administration.

“I want to commend you for your character; actually the government was misled by the former SSG on your case. By the advice of a private discussion, it supposed to be a suspension for not attending the meeting of Ministry of Agriculture that I called that early morning and I want to make it very clear that there was no time anybody suspected you of attending any other political meeting, there was nothing like that. Nobody has ever said anything like that.

“But the case was supposed to be for suspension but somebody was overzealous and converted it to termination and when the government makes mistake, it has to stand by it. And so, we have to find a way to ameliorate whatever injustice you suffered, we will find to do that in a way of trying to cushion the effects of all the salaries you didn’t collect, we will do that.

“But one thing that is very significant is that you have demonstrated the spirit of a child of God. In the months you were waiting, you did not castigate the government you served, you fought for. You didn’t castigate the party and I know all the overtures made by those who don’t think good for the government and our people. You stood your ground, not for the love you have for me but because you believe in this calling of God.