Ebonyi State Government has banned over-the-counter sale of antibiotics and analgesics such as tramadol, codeine contained products unless prescribed by a medical doctor.

Senior Special Adviser to the Governor on Health Services, Dr. Sunday Nwangele announced the ban on Monday, July 2, 2018, at the executive chambers while briefing journalists.

He said State government will also commence a public screening of youths in the state over Hepatitis B surface angiten, lamenting that most youths tested positive to the disease during the just concluded Nigeria Police Force recruitment screening exercise. 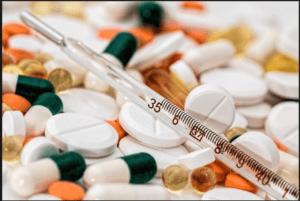 He said the ban was not placed on all analgesics, adding that drugs such as paracetamol and other pain relief were out of it, but laid emphasis on higher classes of analgesics such as tramadol which he said can be injected, steroidal and oral.

“It has come to the knowledge of Ebonyi state that during a screening of potential youths for either police, army, customs, and paramilitary, a lot of this young people are found to be positive for B surface antigen.

“Any moment from now, the state government is going to embark on

public screening for Hepatitis B surface antigen especially among the for the population of the class at risk.

“There is also a restriction on the sale of antibiotics and over the counter. From now henceforth, it is expected that and anti-biotics be sold following a doctor’s prescription.

“We are talking of serious analgesics. It could be oral which is that we drink or injection, it can also be steroidal or nonsteroidal.

“This is where a doctor’s prescription must come in. These types of analgesics are usually abused and some of them work in the brain like tramadol”, he said.