Contrary to reports that the Deputy Senate President, Ike Ekweremadu developed high blood pressure while in the Economic and Financial Crimes Commission, (EFCC) custody, he has debunked the claim, describing it as false. 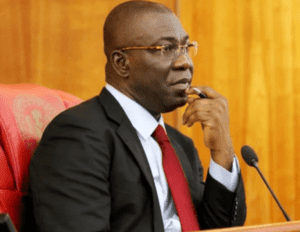 The Deputy Senate President was during the week arrested and interrogated by the commission, and rumors that he developed high blood pressure started flying.

On Friday, Ekweremmadu set the record straight through his Media Adviser, Uche Anichukwu, who issued a statement on the matter.

He also denied reports that fresh facts were discovered in the process of the arrest while dismissing it as a propaganda.

Anichukwu said that his boss had gone to EFCC on that fateful Tuesday to pick another date for his appointment since his invitation to the commission didn’t hold following the siege on his residence.

“My attention has been drawn to false reports in some national dailies that the Deputy President of the Senate, Senator Ike Ekweremadu, developed High Blood Pressure in the custody of the Economic and Financial Crimes Commission, EFCC) upon alleged presentation to him of a fresh set of purported “hidden properties” supposedly acquired by him. There is no truth to this propaganda.

“It would be recalled that operatives of the EFCC and men of the Nigeria Police laid siege to his residence at about 6 am on Tuesday, July 24, 2018, requesting him to report at its headquarters at 10 am the same Tuesday. However, no letter of invitation was delivered to him until around 9 am on that day.

“Since the siege would not allow him to honour the belated “invitation” the same day, he, as a law-abiding citizen, wrote to the EFCC to request for another date, hence the rescheduled appointment of Tuesday, July 31, 2018.

“Senator Ekweremadu honored the 10 am appointment on the fixed date and left in the evening of the same day when he was granted bail on self-recognition with an understanding that he would report at the EFCC office at 10 am the next day for a continuation of the interview.

“He reported at the EFCC on Wednesday, August 1, 2018, at 10am as scheduled, but informed them that he was not feeling well, a fact the EFCC doctor confirmed. He was then allowed to leave to see his doctor and it was agreed that a new date would be fixed for the continuation of the interview.

“So, there was no interrogation whatsoever on Wednesday, let alone presentation of so-called additional “facts” that purportedly triggered his blood pressure. Likewise, there were no new “facts” presented to him the previous day, Tuesday, July 31, beside those concocted by the dismissed Chief Judge of Enugu State, Innocent Umezulike and his cohorts in their petition.

“The Office feels compelled by the mischief and orchestrated media trial to put the “facts” straight on this particular issue.

“We thank our supporters for their genuine concern and prayers. We equally urge them to remain calm,” according to the statement.