Ebonyi state governor has reacted to a recent statement credited to the national chairman of the All Progressives Congress, (APC), that he should apologize to Ebonyians for allegedly stopping them from using the Abakaliki Township stadium for their August 4, rally in the state. 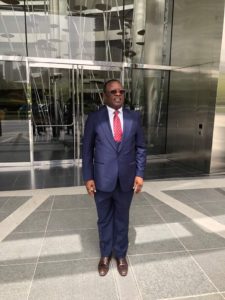 Governor Umahi on Sunday told the national Chairman that his demand for an apology was pure blackmail aimed at scoring public sympathy.

Umahi said that the ruling party, should through its national chairman apologize instead to Nigerians for misleading the masses and destroying the country.

In a statement by his chief press secretary, he noted that Oshiomole was not showing any regards for a serving governor by making such utterance.

He described the statement as baseless and one of the propaganda of the APC that has lost touch with the masses especially in Ebonyi state.

He said the national Chairman had failed to reconcile the division in his party, and yet want an apology from a sitting governor to a party that has been rejected by not only Ebonyians but Nigerians at large.

He noted that Oshiomole instead of being grateful to have enjoyed the best road network that could only be found in Ebonyi which even APC governors could not provide had the guts to demand an apology.

ALSO READ:   APC Convention: Oshiohmole Reveals Why Others Stepped Down For Him

Stating: “The statement credited to the National Chairman of All Progressives Congress, APC, Comrade Adams Oshiomole requesting Governor David Umahi to render an apology for allegedly refusing the faction of the party in the state to use the state Stadium for their rally, is not just childish but pure blackmail aimed at scoring public sympathy.

“The statement is baseless and one of the propaganda of the APC who has lost touch with the masses especially in Ebonyi state.

“It is very shameful for Adams Oshiomole to have made the statement credited to him while in the state. He has not disappointed Nigerians on his usual naked dance when he said Governor Umahi denied a faction of his party usage of the PA Ngele Oruta International Stadium which is undergoing reconstruction.

“It became more childish for the National party chairman who had earlier called Governor Umahi on phone and informed him of his coming to the State to have made such ridiculous statement whereas he was aware of the decision of a faction of his party to shift the date for the rally to 11th August.

“Oshiomole and Umahi have shared great friendship before this rally and as a sitting Governor, Umahi while in Edo state to conduct Governorship primary election of PDP in 2014 did not only pay a courtesy call on Oshiomole but had personal interaction as brothers despite their differences in political association, this is a pure example of political maturity exhibited by Umahi which APC lacks.

“One would have expected Oshiomole as a senior comrade to show respect to a sitting Governor if he was not hypocritical in his alleged relationship and tolerance for opposition but he decided to fly into Abakaliki, enjoyed the ambience of a serene environment and drove around a beautiful city with the best road network in the country and then mounted the podium and started spewing his usual political blackmail which he has been known for.

“More worrisome is his visible silence over the factions in his party in the state and his inability to fuse the divided party into one but has descended so low to demand an apology from a sitting Governor over a Stadium that is under construction.

“APC has been rejected by Nigerians and Ebonyians have no reason whatsoever to identify with a political party without known direction towards the betterment of the country. This is what Oshiomole should be concerned about and not waiting for an apology from Governor Umahi because he will have to wait forever.”