Atiku said this at Peoples Democratic Party (PDP), Secretariat Abakaliki during his familiarization visit to the state yesterday.

He said the All Progressives Congress (APC), led by President Buhari is the most corrupt of all the governments since the inception of democracy in 1999. 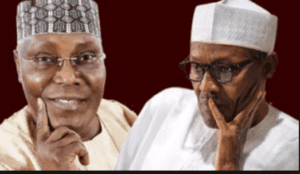 Atiku said the Buhari’s government is competent and running the one-sided administration.

Addressing PDP supporters, he accused the Buhari administration of only fighting corruption while other responsibilities of government were neglected.

“So, let nobody come and deceive you on corruption; they are more corrupt than any government that I know since 1999. We shall be revealing their level of corruption. Fighting corruption alone is not the only responsibility of government.

“I am here to introduce myself to the people of Ebonyi State to seek your support and that of our party so that we can throw out Muhammadu Buhari from Aso Rock. On Monday, 40 political parties came together as part of efforts to present one candidate for presidential election in 2019.

“Therefore, we are determined, we are united and we are ready to make sure that in the next election, whether state, national or federal, we will kick out APC in every state in this country. We have never experienced the level of poverty we are facing today. They are selling crude oil around $70 per barrel now; when we came in 1999 it was around $10 dollars per barrel.

“I want to assure you that your party, PDP, is ready to take that power, but we can only do so through your support and your unity of purpose,” he added

He promised to tackle unemployment, which he said is high under APC government if elected president next year.

Atiku also applauded Governor David Umahi for his developmental strides and called on Ebonyians to re-elect him in 2019.

On his part, Gov. Umahi said South-East will negotiate 2019 presidency and that the zone will vote for a presidential candidate who will develop the zone.

“As the chairman of South-East Governors’ Forum, we shall come together and all the areas of marginalization that we have been talking about, it is a time to discuss with our PVCs. The people of South-East will be decided by the leaders of South-East and any leader that is in agreement with our terms, we will follow the person.”

He stated that Atiku has all it takes to be president of the country.