JAMB N36m: The Economic and Financial Crimes Commission (EFCC) has concluded investigations and are now ready to arraign Philomina Chieshe who had last February alleged that a strange snake girl swallowed N36m from Joint Admissions and Matriculation Board (JAMB), office in Makurdi.

Candidates had purchased scratch cards from JAMB state offices and other designated centers, to gain access to the Board’s website for either registration or to check their admission status. 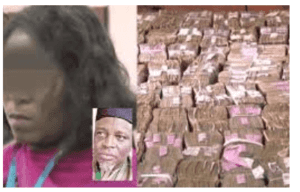 After selling of the scratch cards, auditors were sent to different state offices of JAMB to compile lists of sold and unsold scratch cards and to recover any money that might have either been generated or mismanaged during the period of the sale of scratch cards.

However, the team on getting to JAMB office Makurdi, Philomena who was a sales clerk, claimed she could not give the account of N36 million she made previous years before the scratch cards era was scrapped.

During interrogation, Philomena confessed that it was her housemaid that connived with another JAMB staff, Joan Asen, to “spiritually” steal the money from the vault in the accounts office.

Also, Mr. Samuel Umoru who Philomena later admitted instructed her to divert the JAMB N36m would be arraigned.

Also, the clerk in Nasarawa State JAMB office , Tanko Labaran, who could not give account of N23million scratch cards in his possession would be arraigned

While the officer in charge of the Kano state JAMB office of the board, Yakubu Jakada, will be arraigned for inability to account for e-facilities cards valued at N20m sold through an agent in one of the banks.

Meanwhile, Other JAMB officials would to be arraigned for allegedly diverting nearly N100m belonging to the Joint Admissions and Matriculation Board.

Recall the Minister of Finance, Kemi Adeosun, had said JAMB, for the first time, remitted N5bn to the government’s coffers with a promise to pay the balance of N3bn compared to maximum N3m remitted yearly in the last 40 years.