Speaking on the issue, the Executive Governor of Ebonyi State, Engr. David NwezeUmahi accused opposition parties in the state of planting the bomb; he described them as being desperate, jobless and aggressive to take over power. 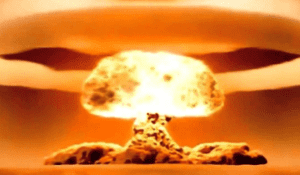 He directed service chiefs in the state to make reports to their offices notifying them of the incident, while the state government will also make a report to security chiefs in Abuja and the Presidency to complain about the incident.

“Our eyes will be on these desperate politicians both on social media and those that are engineering those on social media, and we will like security agents to investigate this properly and unravel the people that planted that bomb and if they don’t do that, it means the perpetrators will plant another one and this time it will blow them up not us,” he stated.

In her reaction, the police public relations officer, ASP LovethOdah, said the IED was discovered by a good citizen of the state on Monday, June 18, 2018, who alerted the police on the device.

She said that the state Commissioner of Police, CP Titus Larmode and Ishieke DPO, the anti-bomb unit, among others quickly responded to the distress call, lo and behold a substance was seen in a bucket with wires visible.

Odah noted they evacuated the bucket and its content for a test and was surprised when it was confirmed by the anti-bomb unit to be an Improvised Explosive Device.

The spokesperson noted that the device was planted on a track road leading to a mining site behind PDP Secretariat.

She said the explosive looks like what had been kept for over a week or more “because grasses have started growing around the bucket, and the way and manner it was kept, if you don’t look intently, it will not be easily detected. The place was swept and confirmed explosive free for now but it is a lesson for all. We have to be mindful of our environment,” she noted.

Odah expressed worry that someone could come up with such thought here in Ebonyi state, stressing that the explosive was kept there to be detonated on a later day. She added that all that was needed was for the wires already connected to be jammed together.

She reiterated that security is everyone’s business and a collective responsibility “it is not just for police alone, not just for other security agencies but all hands must be on deck including that of every civilian. We all need to police our own area for a better security of lives and properties.”

“There is need to report any suspicious movement around you, provide police with valid information so as to get rid of miscreants in the state,” she advised.

She also assured members of the general public that police must get to the root of the matter as serious investigation into the incident was on going.