Hal Robson Kanu is a famous soccer player for the Welsh team. His performance stands out and so does his looks. Why does he look different from his teammates? Where is he from?

It’s a common fact that everyone likes to identify with success so, Nigerians are asking, is he one of us? His surname, Kanu, looks like a positive indicator but let’s not jump into conclusions. Take a look at his family background.

Hal Robson Kanu is the son of Recchi Kanu, a Nigerian. His father was a renowned legal practitioner in Nigeria before he moved to London. After settling down in London, he met Hal’s mother, Eva, a British local. Eva’s father, Reverend Ian Leonard Robson was once a Vicar in the Kensington Church in London. So, that’s where Hal was born, in London, with a silver spoon. 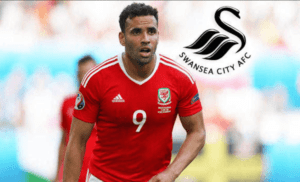 He spent most of his childhood in his grandfather’s house; a big vicarage with 18 rooms situated right next to Princess Diana’s house. He was an altar boy and can remember the royalties that visited their church such as Princess Margaret, King of Jordan, Princess of Wales, Mick Jagger and so on.

Hal remembers seeing Prince William and Prince Harry with their mother several times but they never played together simply because of the age difference. Instead, he used to run around with Mick Jagger girls after the christening of Elizabeth Jagger.

Despite this early life of affluence, Hal never thought himself better than others thanks to his grandmother who helped inculcate those principles. He had a modest upbringing and appreciated everything he had. He extended his hands to the poor and homeless even as a child.

Why does Hal Robson Kanu play for Wales if he’s not Welsh?

Having gone through his family background, your guess is as good as mine. Hal must have a Welsh origin somehow. Yes, he does. Hal’s partly Welsh through his maternal grandmother Elizabeth who originated from a Welsh city named Caerphilly. This is how he’s a Welsh player not only because of his team membership but also because of his blood relations.