If the song wins people’s hearts, so will the dance step. Any trending dance step will be used to dance other songs throughout that period. Now, shaku shaku is dominating but do you know how it came about?

This dance become the talk of the town in 2017, after the very popular Nigeria rap superstar Olamide, also known as Badoo danced it in his video. 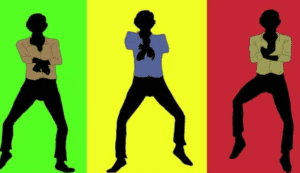 Although the dance is credited to Olamide, the truth is that he is not the inventor of the dance. But he played the major role in the crossing over of the dance to the mainstream media. Shaku Shaku is a street dance. The dance steps are like the steps of a drunken person or someone who has smoked copious amounts of weed.

It is done by stretching out the arm and crossing them over each other in front with the legs widened out and launching into a graceful half-galloping. The rest routine in the dance is more of a freestyle. The dance has even been tagged as the Nigerian Gangnam style.

According to DJ Real, Shaku Shaku name is for street guys, and the dance was named after their particular style of dances when they are drunk or have smoked weed.

The DJ thinks that the dance comes from Agege area in Lagos state. After months of trending beneath the surface, Olamide who has a reputation for bringing the street into the mainstream media used Shahku Shaku dancers in the video of his hit song “Wo”.

The dance started to become popular. But the main breakthrough of Shaku Shaku by Olamide came after the fourth edition of his annual Olamide Live in Concert (OLIC 4) show. Instead of holding the concert at the popular Eko Hotel convention centre, he held the show on the mainland at the Teslim Balogun Stadium.

The concert showcased some of the best street records of 2017 by artists like Dj Real, Slimcase, Dj Enimoney with the dance showcased in front of more than ten thousand people.

By the end of 2017, the Internet was filled with different videos of people doing the Shaku Shaku dance including popular artists like Davido, Dj Cuppy, Tiwa Savage, Wizkid.

Olamide Shaku Shaku dance has now become a trend in all the songs released since then. The dance has inspired or has been showcased in many other songs since it became popular.

How To Dance Shaku Shaku Dance

The dance steps can easily blend into already existing songs. Dance steps are easily learnt visually but here is a little description of the dance:

The dance starts with you standing with your legs astride. Then stretch your arm forward slightly crossed over each other. Then try to make a false or unfinished leg over movement to the right and then to the left. Your upper body will move slightly in sync in either direction of your legwork. Repeat the leg over movement at least three times on both legs.

Then you will make a hand movement like you are pulling the cord of a generator. You can try various head movement while doing the leg over movement in sync. Finally, you do a quick squat once or two times successively while you pull out your legs as you rise up. Then you repeat the routine all over again.

There are no fast rules, so you can freestyle and spice it up anyhow you want it as long as you do the basic things explained above. You can watch various Shaku Shaku dance videos on YouTube to see how people have mixed it.