Building a serious relationship with a celebrity in any field can be tough. Being a celebrity especially in sports requires a lot of commitment and sacrifice. They don’t often have time to date or make a serious commitment to another. They devote all their time to their career. That is almost the case of Serena Williams.

Serena Williams is a sports celebrity, an American professional tennis player. The Women’s Tennis Association ranked her world No. 1 in singles on eight separate occasions between 2002 and 2017. She has won the second-most singles titles (23) in women’s Grand Slam tournaments of all time. 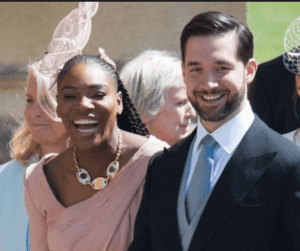 With all these titles, people are often surprised to learn that Serena is happily married with a child. Serena Williams got married on November 16, 2017, in New Orleans to Reddit co-founder Alexis Ohanian. This raised a lot of brows. Now, the question on everyone’s mind is, who is Alexis Ohanian?

Alexis Ohanian is an American-Armenian businessman and the co-founder and chairman of Reddit as mentioned earlier. He lives in San Francisco and runs other businesses including an online travel site called Hipmunk and Breadpig website. He is 35 years old.

Alexis is from New York, and his district of birth is Brooklyn. He schooled in Howard High School in Ellicott City and graduated from the University of Virginia. He got a degree in History and Commerce.

He partnered with Steve Huffman to create the idea over Y Combinator. In fact, Y Combinator was one of his first creations. Forbes calls him “Mayor of the Internet.” However, they passed on the idea but managed to create another great resource, reddit.com. Their main goal was to get it on the first pages of the internet.

In summer 2005, Conde Nast purchased Reddit company. Nevertheless, Alexis continued to lead Reddit as one of the boards of directors. In 2009, Ohanian starred at the social YouTube channel TED where he introduced his work with Reddit. In 2015, Alexis returned fully to Reddit as a co-founder to be a leader of the company which had just gained independence. In 2018, he again stepped back from the company and focused on investing.

In 2010, Alexis managed to launch a travel website called Hipmunk. At the same year, Alexis announced the beginning of “Das Kapital Capital.” It was the company focused on start-up investing. Alexis Ohanian is a co-founder of Initialized Capital. Therefore, he made great investments in startups, like Cruise, Opendoor, Zenefits, and Instacart. He had three funds in the total management of $160 million. In 2014, Alexis was named the number one tech investor for the network by CB Insights.

In late 2010, Alexis spoke against anti-pirate laws in the USA. Alexis tried to speak to the members of the Congress and encouraged them to join the free internet protests on the streets of the country. He also marched together with protestors in different cities of the USA.

The most ambitious riot of Tech support for him was in his home city – New York. In 2012, Alexis teamed up with Erik Martin to embark the Internet Bus Tour 2012 to campaign for an open Internet. One of his main ideas was to create the day which all geeks of the country can appreciate.

According to The Daily Dot, Alexis Ohanian was named one of the biggest and supportive activists for internet freedoms of 2012. At the same year, Forbes named him a leader of the Internet town.

Alexis managed to create several fantastic companies to support the idea of the free internet. He managed to bring into life ideas, like the Initialized Capital Honey Badger, “Chip,” “Snoo,” Breadpig. Alexis also supported Hijab emoji project. He worked together with Rayourf Alhumedhi on the idea of hijab emoji to release and respond to all critics.

Alexis teamed up with The Chambers Brothers to launch a Kickstarter project to make a new album called “Lester’s Time Has Come.” This project managed to get him $61,000. In 2014, he also launched the project called Black Girs Code on Tilt.com. At the same year, Alexis worked to launch through Tilt.com his ideas of “Save Net Neutrality.” It was the crowdfunding project to support net neutrality.

Alexis Ohanian published several books, like “Not Managed,” “Without Their Permission: How the 21st Century Will Be Made”. The Wall Street Journal named his books in the list of the best sellers for Hardcover Business.

In conclusion, you can see that Alexis Ohanian has a lot going on for him besides being the husband of the famous tennis player, Serena Williams.